Home » Alaska Air Is Faulted in Crash That Killed 88 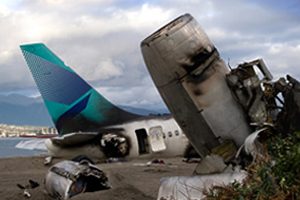 Lack Of Grease Caused The Crash Of Alaska Air Flight 261. Federal safety investigators said Tuesday that a lack of grease on a tail component caused the deadly crash of Alaska Airlines Flight 261 off the California coast, rejecting the airline’s argument that the kind of grease recommended by the manufacturer was at fault.

A draft report being considered by the National Transportation Safety Board blames insufficient lubrication for excessive wear and the eventual failure of the MD-80’s jackscrew, which helps move the plane’s stabilizer and sets the angle of flight.

“The only factor found to explain the severe wear was a lack of lubrication,” said Joseph Kolly, an NTSB investigator.

The plane crashed in January 2000, killing all 88 people aboard. Safety investigators found that the airline industry uses unreliable techniques to check for wear on the jackscrew threads. The NTSB staff recommended that Boeing develop a more reliable test.

MD-80 planes were built by McDonnell Douglas, which Boeing Co. bought in 1997. Alaska Airlines spokesman Jack Evans says the company is still looking at the report and has no immediate comment.

Boeing spokeswoman Liz Verdier says the company needs more time to review the report before reacting. However, she says in the past three years a lot of effort in the industry has been put into making improvements to make sure that kind of accident doesn’t happen again.

“Those areas have mainly been in operations and maintenance where improvements have been made and relayed to the customers to improve the industry’s safety level,” she said.

On its employee Web site, however, the airline said it expected the failure of the jackscrew assembly to be cited as the cause “with emphasis on Alaska’s maintenance practices at the time of the accident.”

The notice said the final report may include recommendations and that it was likely that many, if not all, have been implemented.

Flight 261 took off from Puerto Vallarta, Mexico, on Jan. 31, 2000, with scheduled stops in San Francisco and Seattle. The pilots reported problems with handling and were planning to make an emergency landing in Los Angeles when the stabilizer broke off, causing the plane to roll over and dive into the ocean, killing the 88 people on board.

Alaska Airlines has said the jackscrew failed because of extreme wear caused by a kind of grease recommended by Boeing. The airline also blamed the design, saying the threads on the nut of the jackscrew assembly failed.

Boeing spokeswoman Liz Verdier said the company will wait for the final report before commenting. However, Boeing previously has said that the jet that crashed went “an extended period without adequate lubrication.”

After the disaster, the FAA thoroughly reviewed the airline’s maintenance practices and recommended that the carrier not be allowed to maintain its own planes if problems weren’t fixed, said FAA spokeswoman Diane Spitaliere.

The NTSB found this spring that Alaska maintenance workers continued to make errors in inspecting the wear on the jackscrew and failed to lubricate flight control components properly.

“That’s worrisome to us,” Clark said. The FAA also reviewed the maintenance programs of nine major airlines and reported in February that the carriers had made improvements.

The Transportation Department’s inspector general, though, reported in April that the FAA’s examiners were inadequately trained and that the agency needs to do a better job identifying safety problems.

The inspector general is auditing whether the FAA sufficiently monitors airplane repairs not conducted by the airlines themselves. In addition to the NTSB inquiry, Alaska Airlines and Boeing face wrongful-death lawsuits that are scheduled for trial in April.

Our Aeroplane accident lawyer is here to help you when you need it the most.