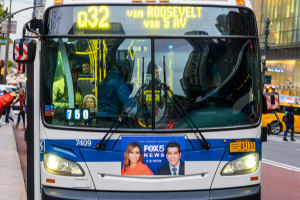 HARLEM, NY- Nypost.com writes that ten individuals were injured in East Harlem this week when two MTA commuter buses collided during the early morning hours. The collision happened at the intersection of East 116thStreet and Madison Avenue.

One of the buses hit the other at a red light. Ten people from the bus that was struck were sent to the hospital. No one from the other bus reported injuries. The drivers were not among the injured. One of the buses had a cracked windshield after the collision. A man who works at a dry cleaner by the scene of the accident said that he observed three to four ambulances at the scene, but that it was difficult to see much because the police were directing traffic around the area.

MTA buses were in over 21 thousand crashes over the course of a three-year period. Some of these incidents were fatal, and on average, 2.7 people suffered injuries every day in accidents involving MTA buses.

The city has faced criticism for its practices, which some say lack transparency. Testimony from an individual who sued the MTA claims that the drivers call dispatch when an incident occurs rather than the police or emergency services. Reports indicate that the city is working on defending against the claim before the ambulances even leave the scene.

Records that MTA keeps do not include information about whether or not the driver was at fault, making it difficult to determine whether the buses or people around the buses are the problem. Buses are often difficult to maneuver around busy streets, and drivers cannot always see pedestrians or cyclists because of blind spots. In some cases, a driver can strike a person and not even notice.

Have you or a loved one been injured in a bus accident?