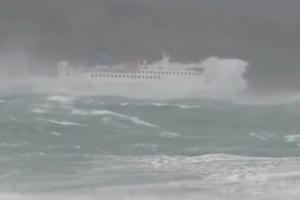 Alaska Cruise Ship Accident Injury Lawsuit. On May 14, 2007, a riverboat style cruise ship ran aground off the Alaska coast after hitting Hanus Rock at the southern end of the strait, 49 miles west of Juneau, and all 281 passengers onboard were safely evacuated without any injuries, Coast Guard officials said.

The ship, The Empress of the North sent out an emergency radio message at 12:35 a.m., Coast Guard officials announced.

As Coast Guard helicopters reached the ship, it was listing at the southern end of Icy Strait, about 15 miles southwest of Juneau, and it began taking on water, said Petty Officer Christopher D. McLaughlin. The ship was still flooding, but was traveling to Juneau under its own power.

Thirty-three of its 75 crew members stayed on board for the trip. It wasn’t immediately clear why the cruise ship ran around, McLaughlin said. Majestic America Line of Seattle operates the Empress of the North. Dan Miller, a spokesman for Majestic America, said the grounding occurred on the second day of a seven-day cruise.

The 110-foot Coast Guard cutter Liberty, the Spirit of Columbia
cruise ship, and several other private vessels were taking on passengers from the damaged Empress of the North. “Many Good Samaritan boats on scene are taking off passengers,” McLaughlin said.

“The fishing vessels Evening Star and Willow were able to moor up to cruise ship and 33 passengers transferred from the Empress of the North to the Evening Star and 12 passengers to the Willow.” By daybreak those remaining aboard were being taken aboard the Spirit of Columbia, a smaller vessel operated by Cruise West of Seattle, McLaughlin said.

Coast Guard spokesman Mark Guillory said the Coast Guard was trying to come to a decision as to where to send the ship for an investigation into why it hit rocks in the island-dotted Alaska coastal area. Additionally, The National Transportation Safety Board (NTSB) will also be sending a team to investigate.

In March of last year, the same ship, which was built to resemble a Mississippi River paddleboat, slammed into a sandbar while cruising the Columbia River, which separates Oregon and Washington State, according to reports.

Our Cruise Ship accident attorney is here to help you when you need it the most.