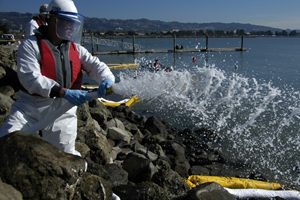 As we reported previously, BP has been using a line of dispersants called Corexit. Approval for Corexit was rescinded in Britain a decade ago because laboratory tests found them harmful to sea life that inhabits rocky shores.

Safety documents for Corexit warn that they must be handled with great care in their original form, should not touch the skin and can damage lungs. The documents state that the potential environmental hazard is “moderate,” but “low” when used as directed at sea.

According to the Associated Press, BP so far has applied 600,000 gallons on the surface and 55,000 underwater. Such use of the dispersants is unprecedented.

BP Was Criticized For Its Use Of Corexit

At a hearing before the House Transportation Committee yesterday, BP was criticized for its use of Corexit. Evidence presented at the hearing indicated that there are at least five chemical dispersants available that are more effective and less toxic than Corexit. In her testimony, EPA Administrator Lisa P. Jackson acknowledged that the chemicals’ long-term effects on aquatic life are still unknown

On Monday, Rep. Edward J. Markey (D-Mass.) also questioned the use of the dispersants in a letter to EPA head Jackson. “The release of hundreds of thousands of gallons of chemicals into the Gulf of Mexico could be an unprecedented, large and aggressive experiment on our oceans, and requires careful oversight by the Environmental Protection Agency (EPA) and other appropriate federal agencies,” the letter said.

In a statement issued today, BP defended its use of Corexit, noting that it “was readily available in the quantities required by the spill response plan which was pre-approved by the government for use in spill response.”

BP said it was looking for a way to comply with the EPA’s order.