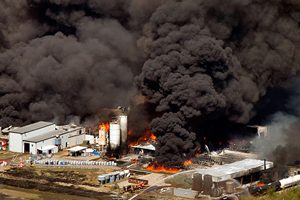 Texas Chemical Plant Fire Could Spark An Explosion. A fire at the El Dorado Chemical plant in Bryan, Texas, while under control, continued to smolder today. At least 1,000 people are still evacuated because of the risk that ammonium nitrate at the plant could spark an explosion.

The fire at the El Dorado Chemical Co. plant broke out around noon yesterday. Right now, it looks like a welding spark ignited the blaze.  The fire produced a plume of smoke that extended up to 60 miles from the plant. Because of the toxicity of the chemicals involved, fire crews were forced to allow the blaze to burn itself out.

City Of Brian Was Under A Mandatory Evacuation

The City of Bryan was under a mandatory evacuation order most of yesterday, as was part of Brazos County north of FM 60.  The roads into Bryan were closed.  Classes at Texas A&M’s main campus were also canceled, but resumed today.

By 5:00 p.m. yesterday, the plume of smoke produced by the chemical fire had grown smaller, but officials said the danger was “far from over”.   The evacuation order for Bryan was lifted last night, except for  a small area surrounding the El Dorado Chemical Co. plant.  As of this morning, around 1,000 people were still being kept out.