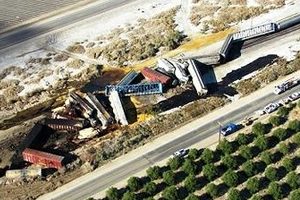 No injuries were reported as a result of the Mecca, California train derailment, but it is still not known when evacuees will be allowed to return home.

The Mecca, California train derailment occurred shortly before 9:00 p.m. yesterday just outside of the southern California desert town, located about 140 miles southeast of Los Angeles.  The Union Pacific freight train was traveling from Colton to El Centro, California when 29 cars went off the track.

Fifty-three of the Union Pacific train’s cars were full, and some were carrying hazardous chemicals.  Investigators from the fire department, Riverside County Hazardous Materials Team, county environmental health officials and Union Pacific were all called to the scene.  The derailment damaged about 2,000 feet of track, and a stretch of Highway 11 had to be closed.

Mecca Residents Have Yet To Be Allowed Back

About 60 Mecca residents living within one mile of the Union Pacific train derailment have yet to be allowed back in their homes.  People were being kept out of the area around the Mecca, California train derailment site until acid leaks were stopped and cleanup crews could begin their work.

Several cars from the Union Pacific train were leaking hydrochloric and phosphoric acid.  Phosphoric acid is used for rust removal and to prepare steel surfaces for painting. Inhalation of  phosphoric acid can cause irritation to the nose, throat, and upper respiratory tract.

Hydrochloric acid is a highly corrosive and toxic liquid that can become a mist if it comes in contact with water.  Inhaling hydrochloric acid vapors can cause coughing, choking, inflammation of the nose, throat, and upper respiratory tract, and in severe cases, pulmonary edema, circulatory failure, and death.

The vapors from hydrochloric acid can irritate and damage the eyes, and direct contact with the toxin can cause redness, pain, and severe skin burns.  Hydrochloric acid is used in leather processing,  the production of PVC and plastics, and it has many other industrial applications.