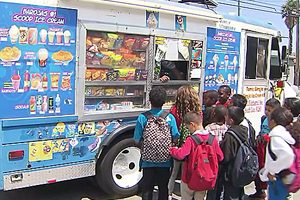 In Northlake in 1989, another boy, also 4, was killed when he crawled under an ice cream van, trying to retrieve the cone he had dropped.

And closer to home, in both Carpentersville and Hoffman Estates, children were killed in similar accidents in the 1970s, prompting both villages to ban ice cream trucks more than 30 years ago.

Streamwood is considering doing the same. The village board has moved toward enacting a ban of its own, prompted by an alarming number of “close calls” involving children, said Acting Village Manager Gary O’Rourke.

“There’s a real potential for kids to get hit. They just charge out of their house and run into the street when they hear the music,” said O’Rourke, who claims the village gets complaint calls every year from worried parents.

The village board is expected to make a decision next week.

The ban in Streamwood would not affect ice cream vendors at park district functions such as youth baseball games, O’Rourke added. Instead, the trucks would not be permitted to cruise neighborhood streets.

“They come up my street all the time, and my kids chase them,” said Streamwood Trustee James Cecille, who expressed his discontent at the safety hazard as well as the blare of the van’s music box.

“But if people come to the public meeting next week and say they want to keep the ice cream vans, then I’ll listen,” he added.

Not Everyone In Streanwood Agree With Ban

Not everyone in Streamwood is expected to agree with the ban. Even in communities where ice cream trucks have been prohibited for years, the argument goes on.

In Carpentersville, Trustee John Noverini wants to bring the ice cream man back, saying the sound of the truck’s bell, the swirling shapes of Popsicles, and the taste of strawberry ice cream are an American institution.

“Kids drown in swimming pools,” he said. “But we don’t go around banning pools. I find the Carpentersville’s stance paternalistic – saying that people cannot take care of themselves,” he said.

“At a pool, you have entire safety system in place – a fence, a lifeguard, a rescue procedure. You cannot enforce that with the ice cream trucks. It’s unfair to think that Mom can be out in the yard monitoring the kids every second.”

Hoss Rafaty, president of the Philadelphia-based International Association of Ice Cream Vendors, says municipalities can take a few easy steps to ensure that ice cream vending can be safe – rather than simply outlawing the time-honored tradition.

“Every problem has a solution,” he said, “and cities should look for the solutions, which are already there.”

He said the International Association of Ice Cream Vendors has authored several model resolutions, one of which was adopted by the federal public health department, requiring ice cream trucks to incorporate safety features such as flashing lights and a swing arm, like those used on school buses.

Also, ice cream trucks should be allowed only on streets with a posted speed limit of 30 miles per hour, or less, he said.

“Children can run out to chase a dog or a ball, as well as the ice cream vendor. The safety issue doesn’t go away by just outlawing the ice cream trucks,” Rafaty said.

Our truck accident lawyers are here to help you when you need it the most.