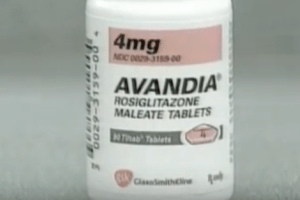 A widely prescribed drug to treat Type 2 diabetes substantially increases the risk of heart attacks and death from cardiovascular disease, according to a study released today that critics say questions the government’s ability to monitor drug safety.

Patients who took Avandia to reduce their blood sugar levels were 43% more likely to have a heart attack than patients who were given other medications or a placebo.

Researchers also found that the drug boosted the chances of dying of heart disease by 64%, according to the report in the New England Journal of Medicine.

The Food and Drug Administration responded by issuing a safety alert on Avandia, recommending that diabetes patients who take the medication discuss the heart risk with their doctors.

Dr. Curt Furberg, a prominent drug safety expert at Wake Forest University who co-wrote an editorial accompanying the study, said the FDA should take Avandia off the market.

“When I look at the totality [of the findings], there’s enough for me to pull it,” he said.

GlaxoSmithKline, the company that makes Avandia, attacked the study as an incomplete analysis of data

GlaxoSmithKline, the company that makes Avandia, attacked the study as an incomplete analysis of data from disparate studies that are difficult to combine. The London-based pharmaceutical giant reported $2.8 billion in Avandia sales last year.

GlaxoSmithKline stock tumbled 7.8% after the study’s release and closed at $53.18 on the New York Stock Exchange, erasing nearly $13 billion in market value.

News of the possible risks of Avandia also ignited a furor on Capitol Hill on Monday, where three major committees announced investigations. Some lawmakers and their staffs have been quietly probing the issue, and congressional investigators said the drug could be responsible for as many as 11,600 heart attacks a year.

The concerns over Avandia could have a major effect on an FDA reform bill making its way through Congress. The Senate-passed version, which the House will soon take up, has been criticized by some consumer groups and lawmakers as too accommodating to industry.

The 200-page bill would significantly boost funding for drug safety

The 200-page bill would significantly boost funding for drug safety, set up a new computerized surveillance network to broadly monitor for risky side effects, and create a legal framework for dealing with drugs that could pose problems.

“This is the latest reminder that FDA isn’t effectively monitoring the safety of drugs used by millions of Americans once they are on the market,” said Rep. Henry A. Waxman (D-Los Angeles), who has scheduled a June 6 hearing on the matter with the Oversight and Government Reform Committee.

Lawmakers compared Avandia to Vioxx, the Merck painkiller whose 2004 withdrawal due to heart risks led to widespread consumer concerns about prescription drug safety and called into question the competence of the FDA.

Type 2 diabetes is a poorly understood disease in which patients lose the ability to metabolize sugar with insulin, leaving them vulnerable to complications such as cardiovascular disease, nerve damage, kidney failure and blindness. Patients typically die of a complication rather than of diabetes.

“Between 65% and 80% of all the deaths from diabetes occur due to cardiovascular disease,” said Dr. Steven Nissen, chairman of cardiovascular medicine at the Cleveland Clinic in Ohio and lead author of the study. “Obviously, a drug for diabetes that increases the risk of heart disease is a serious public health concern.”

Six million Americans have taken Avandia since it was approved by the FDA in 1999, according to GlaxoSmithKline. About 1 million people are currently taking it in the U.S.

The medication, whose generic name is rosiglitazone, reduces blood sugar in patients by increasing insulin sensitivity in cells throughout the body. It is part of a class of drugs that includes Rezulin, which was withdrawn from the market in 2000 after it was found to cause liver failure in some patients and was cited as a suspect in more than 500 deaths.

Avandia and another similar drug, Actos, were thought to be safer because they did not have the same risk of liver problems.

In the new study, Nissen and Cleveland Clinic statistician Kathy Wolski pooled the results from 42 clinical trials comparing Avandia to rival diabetes medications or a placebo.

All of the trials included a group of patients that took the drug for at least 24 weeks and a randomized control group that did not receive the drug. The studies also kept track of heart attacks and deaths from cardiovascular disease among patients in both groups.

The researchers calculated the risks for each of the 42 studies and used statistical tools to weigh their relative importance based on how many patients were involved, how long they took the drug and other factors, said Nissen, who consults with several drug companies but has his fees donated to charity to avoid a conflict of interest.

Because the researchers used second-hand data

Because the researchers used second-hand data, they were not able to address questions such as how long it took for Avandia to affect heart health or how big a dose was needed to see an effect. They conceded that their meta-analysis was less powerful than a traditional prospective study tracking individual patients.

Nissen, who was among the first to raise questions about Vioxx in 2001, said he became suspicious of Avandia in September, when a large study examining the drug’s efficacy in pre-diabetes patients showed that Avandia increased the risk of cardiac events.

Another study in December that compared Avandia with older diabetes medications had similar results.

That prompted him to search for more data. In April, he found a GlaxoSmithKline website with results from all of the company’s Avandia clinical trials, including ones with unfavorable results that were never published in a medical journal. The website was established as part of a settlement with then-New York Atty. Gen. Elliot Spitzer, who accused the company of suppressing unflattering data about its antidepressant Paxil.

FDA officials acknowledged Monday that the agency received preliminary information linking Avandia to a possible increased risk of heart attacks from GlaxoSmithKline as early as the fall of 2005. But officials said they decided against issuing a high-profile warning to patients because of contradictory scientific data.

approved a change in the prescribing information for Avandia, warning of a risk

In April 2006, after reviewing data from another study, the agency approved a change in the prescribing information for Avandia, warning of a risk of heart failure in some patients.

Later that year, GlaxoSmithKline gave the FDA a statistical review combining data from several studies that indicated an increase in the risk of heart attacks. But the company said the finding was contradicted by other data that did not show any such link.

FDA officials said the situation was still too uncertain to warrant anything stronger than a safety alert, adding that it could take several more months to sort out the conflicting data.

Issuing a premature warning could put patients at risk by forcing millions of people with diabetes to suddenly change their medication, said Dr. Robert J. Meyer, a senior FDA official who often serves as the agency’s troubleshooter.

Dr. Stuart Weiss, who treats diabetics at New York University School of Medicine, said he had received 10 calls from patients within a few hours of the study’s release.

“It’s like saying ‘terrorism’ to patients,” he said. “Panic ensues.”