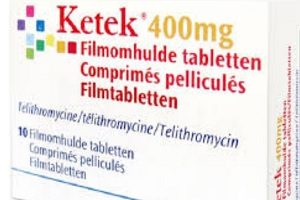 Ketek New Safety Information. The Food and Drug Administration (FDA) today completed its safety assessment of Ketek telithromycin) and is advising health practitioners and patients to be aware of rare but potentially serious health risks. Ketek is the first FDA-approved antibiotic of the ketolide class.

It is indicated for the treatment of acute exacerbation of chronic bronchitis; acute bacterial sinusitis; and community acquired pneumonia of mild to moderate severity, including pneumonia caused by resistant strep infections.

The drug has been associated with rare cases of serious liver injury and liver failure with four reported deaths and one liver transplant after the administration of the drug. The manufacturer is revising the drug labeling to address this safety concern.

Although it is difficult to determine the exact frequency of Ketek-associated adverse events on the basis of FDA’s mandatory and voluntary reporting systems, the agency has concluded that the drugs’ benefit to patients for the approved indications outweighs its risk, including the rare risk of liver failure, and supports its continued availability.

“We are advising both patients taking Ketek and their doctors to be on the alert for signs and symptoms of liver problems,” said Dr. Steven Galson, Director for FDA’s Center for Drug Evaluation and Research.

“Patients experiencing such signs or symptoms should discontinue Ketek and seek medical evaluation, which may include tests for liver function.”  The signs and symptoms of liver failure include fatigue, malaise, loss of appetite, nausea, yellow skin and dark-colored urine.

The warning, which Ketek’s manufacturer is adding to the drug’s labeling, results from FDA’s vigilant monitoring of all drugs after their introduction to the market.  When the agency approved the drug in 2004, based on data in the marketing application, the risk of liver injury with Ketek was similar to that of other marketed antibiotics.

A safety evaluation conducted one year after approval was consistent with this.  However, as the product entered into wider use, FDA’s adverse event monitoring system received some reports of serious liver problems in patients taking Ketek, including some cases of acute liver failure leading to death or requiring liver transplantation.

Following receipt of these reports, FDA conducted a rigorous and thorough assessment of existing data, and continued to engage in U.S. and ex-U.S. monitoring of additional post market events. This work involved efforts by experts in the agency’s Office of Surveillance and Epidemiology and the Office of New Drugs, as well as by recognized external liver disease experts.

FDA tracked reports of adverse events associated with Ketek via MedWatch and also had the benefit of three case reports described in the February ’06 issue of Annals of Internal Medicine.  FDA has now completed its evaluation of this information and determined that additional warnings are required.

FDA will continue to evaluate Ketek-associated safety issues and take further actions if warranted. It is important to note that negative effects on liver function are a known and potential complication with some antibiotics, including Ketek, and as drug usage becomes more widespread, it is expected that rare adverse events may be detected or reported in greater numbers.

Ketek is manufactured by Sanofi Aventis.