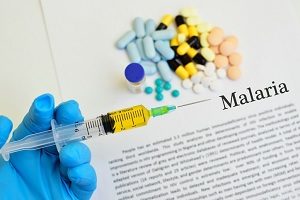 Anti-Malaria Drug Side Effects. It takes special vigilance to prevent serious harm from some medication side effects. In July 2003, the Food and Drug Administration finally insisted that consumers be told about the serious psychiatric problems that occur in some of the 25 million people worldwide who have taken the prescription drug mefloquine (Lariam) to prevent malaria. Pharmacists are now required to dispense a 2,000-word medication guide detailing the warnings.

For a March 2002 report on the dangers of malaria drugs, Consumer Reports filed a Freedom of Information Act request for the FDAâ€™s adverse events reports on mefloquine and reported on the hundreds of psychiatric side effects attributed to the drug. In addition, when some of our staff members were sent to fill mefloquine prescriptions at two independent pharmacies and at nine leading drugstore chains, some received drug handouts that failed to mention any psychiatric side effects.

Nausea, difficulty sleeping, and bad dreams are the most frequently reported side effects, according to the new guide. Users also occasionally experience disorientation, severe anxiety, paranoia, hallucinations, depression, or unusual behavior sometimes after stopping the drug. Some think about killing themselves. The guide warns that people with recent mental problems, including depression, are among those who shouldnâ€™t use the drug.