Lipitor Increased Blood Sugar Levels. Our firm is investigating potential lawsuits on behalf of patients who have taken the cholesterol-lowering statin drug, Lipitor (Atorvastatin), which is manufactured by Pfizer, Inc.

Studies have found associations between ‘Lipitor’, and other cholesterol lowering statins, and increased risks for developing diabetes. These risks appear to be particularly evident in middle-aged and older women.

Patients who developed diabetes due to Lipitor must undergo regular blood glucose level testing, must follow a strict diet, and must take medications for their lifetimes. What’s more, these patients are at increased risks for kidney disease, blindness, heart disease, and other complications associated with diabetes. 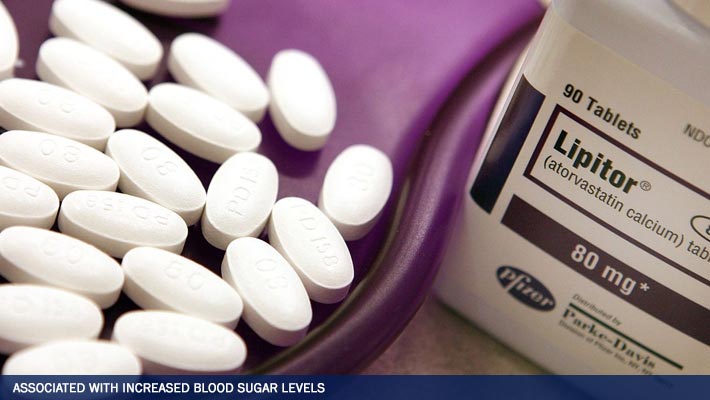 Lawsuits have been filed that include allegations that patients and doctors were not adequately warned about the risk of developing Type 2 diabetes due to treatment with Lipitor. Pfizer promoted Lipitor as safe and effective despite allegedly being aware that ‘Lipitor’ might elevate blood sugar levels and/or lead to Type 2 diabetes. Lipitor’s label did not carry a warning that the drug could lead to changes in blood sugar levels and/or to Type 2 diabetes until the U.S. Food and Drug Administration (FDA) requested a label change in February 2012. Despite this change, there is concern that the Lipitor label does not sufficiently warn patients about the Type 2 diabetes risk.

What is Type 2 Diabetes

Type 2 diabetes is a condition that leads to high blood sugar levels; left untreated, Type 2 diabetes may cause serious health problems such as blindness, nerve and kidney damage, other organ damage, and heart disease and heart attack.

When we eat, food is broken down into glucose (sugar), which travels through the body, prompting the pancreas to release insulin. This reduces blood sugar levels and enables glucose to enter the body’s cells, providing cells with energy needed to function. When diagnosed with Type 2 diabetes, the body is unable to produce sufficient or appropriate insulin and glucose is unable to enter the cells. Instead, glucose accumulates in the blood, leading to blood sugar level spikes. When blood sugar levels remains elevated, very serious and life threatening damage results.

Researchers believe Lipitor may inhibit the function of the pancreatic cells that store and release insulin. Lipitor may also minimize the body’s sensitivity to the hormone, insulin. Various studies have linked ‘Lipitor’ use, and other statins, to diabetes.

For example, in 2013, researchers in Canada found that patients who were taking Lipitor had a 22 percent increased risk of developing diabetes when compared to patients prescribed Pravachol (Pravastatin), a different cholesterol lowering medication.

In 2011, a study based on three large randomized clinical trials also suggested that patients on a high-dose Lipitor regimen may experience increased risks for developing diabetes, especially if they have also been diagnosed with other diabetes risk factors. The trial involved about 4,000 adults who were not diagnosed with diabetes, but who did have a history of stroke. The women, were not diagnosed with diabetes, but had a history of stroke. It is believed that women, even those with what physicians consider a healthy body mass index (BMI), are at the greatest risk of developing diabetes from statin use. The study, entitled “Predictors of New-Onset Diabetes in Patients Treated with Atorvastatin” appeared in the April 2011 issue of the Journal of the American College of Cardiology. The researchers concluded that use of high-dose atorvastatin, known by the brand, ‘Lipitor’, appears to be associated with an increase in risks for new-onset Type 2 diabetes.

In February 2012, the FDA issued a statement on Lipitor and statins. The FDA warned that patients taking Lipitor and other statins may be at an increased risks for developing high blood sugar levels and Type 2 diabetes. The agency also announced that changes were to be made to the drugs’ labeling that would reflect the federal regulator’s concerns. An FDA spokesperson also indicated that prescribing physicians should assess patients’ blood sugar levels following treatment with ‘Lipitor’ or other statins.

The FDA warning pointed out the potential risk for liver injury, memory loss, and muscle damage associated with Lipitor, as well; however, ongoing litigation only involves Pfizer’s alleged failure to warn about the Type 2 diabetes risk tied to ‘Lipitor’.