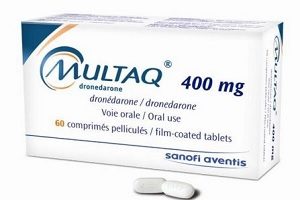 Multaq Safety Concerns. Multaq is coming under increasing scrutiny in both the U.S. and Europe as concerns about its safety and effectiveness continue to mount.  At the same time, many doctors appear to be backing away from Multaq because of safety concerns.

Multaq is approved to treat temporary atrial fibrillation. In January, the U.S. Food & Drug Administration (FDA)  announced that the U.S. label for ‘Multaq’ had been updated, following reports of liver damage, including severe liver failure, associated with the drug.

Then in July, the FDA warned that  it was reviewing information from a Multaq clinical trial that was halted in June after moderately ill patients treated with ‘Multaq’ experienced higher-than-expected adverse heart reactions, including death.

Yesterday, FDA announced it was continuing to review Multaq, and hopes “to soon update the public with more information.”  This week, the European Medicines Agency (EMA)  Committee for Medicinal Products for Human Uses (CHMP)  is slated to discuss ‘Multaq’ safety data, and could recommend new restrictions  – possibly even a market withdrawal – for  thedrug.

According to a report from The Wall Street Journal, some doctors will no longer prescribe Multaq.

“I’m surprised that the drug has persisted,”  John Mandrola , a Louisville, Kentucky, cardiologist told the Journal.  ” I don’t know any of my colleagues who would start a patient out on ‘Multaq’. It just doesn’t work.”

Multaq had already been the subject of safety worries

When it was approved in 2009, Multaq had already been the subject of safety worries, and was outfitted with a boxed warning after a trial showed that it more than doubled the risk of death for the sickest heart-failure patients in one study, compared to placebo.

According to a report from The Wall Street Journal,  FDA reviewers expressed concern that ‘Multaq’ “presents a problem that the label alone may not be able to cover.”

FDA reviewers also questioned the results of a second trial suggesting that the drug could ward off hospitalization, saying the standards for hospitalization can vary.

In spite of these concerns, an FDA advisory panel recommended the drug be approved, despite struggling with  “whether it was possible to distinguish patients who died from others who might benefit from ‘Multaq’,” the Journal said.