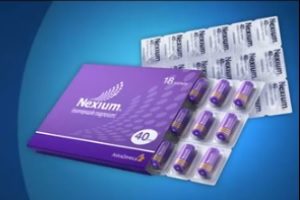 Nexium belongs to a class of drugs known as proton pump inhibitors, or PPIs.  Other prescription drugs in that class include Dexilant, Prilosec, Zegerid, Prevacid, Protonix, Aciphex, and Vimivo.

The safety labeling for prescription PPIs includes a warning that they might be associated with a higher risk of hip, wrist and spine factures.

The U.S. Food & Drug Administration (FDA) has  advised that healthcare professionals and users of PPIs be aware of the possible increased risk of fractures of the hip, wrist, and spine and weigh the known benefits against the potential risks when deciding to use them.  Studies indicate that women over 50 who have used PPIs for extended periods of time face the highest risk of sustaining such fractures.

According to her Nexium lawsuit, 58-year-old Ginny Begin took the PPI on a daily basis between 2003 and early 2011.

In 2005, she snapped a leg bone (left fibula) while walking. In June 2007, the same bone in Begin’s leg and three bones in her ankle broke as she walked down stairs.

Her complaint alleges that as early as 2006, studies had indicated that PPI’s, “by reducing hydrochloric acid in the stomach, interfere with the body’s ability to absorb calcium, thus speeding up bone loss and leading to an increased number of fractures.” Begin continues to suffer severe pain from leg and ankle injuries that never fully healed, the lawsuit alleges.

According to a statement from her attorney, Begin’s Nexium lawsuit may be the first filed against AstraZeneca alleging bone fractures caused by the drug.