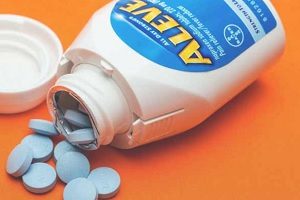 Aleve Painkillers Linked to Risks. The epidemic of bad news about the potential risks of popular anti-inflammatory medications expanded yesterday as federal officials announced that naproxen, a painkiller sold by prescription and also over the counter as Aleve, might increase people’s risk of having a heart attack or stroke.

The new findings bring to three the number of widely used anti-inflammatory drugs suddenly in the spotlight for their potential health risks. Vioxx was pulled from the market this fall, and its sister drug Celebrex, the blockbuster arthritis drug, was linked to heart attacks and strokes last week, stopping a major clinical trial.

Researchers uncovered the potential problem with naproxen on Friday during a quick review of data from a large, ongoing three-year-old National Institutes of Health study. As part of that study, which has aimed to see if anti-inflammatory drugs can help delay the onset of Alzheimer’s disease, 2,500 elderly people have been receiving regular doses of naproxen or Celebrex.

The Alzheimer’s study review, triggered by Celebrex’s recent woes, surprised officials by revealing a 50 percent increase in heart attacks or strokes among study participants taking naproxen compared with those who had been taking placebos. There were no apparent increases in those life-threatening events among those taking Celebrex a reassuring if somewhat confusing finding in light of other evidence to the contrary.

With many volunteers already expressing unease about their ongoing participation

With many volunteers already expressing unease about their ongoing participation in the Alzheimer’s study because of the recent reports on Celebrex, and with new evidence suggesting naproxen may have problems of its own, NIH officials and study leaders decided to susTpend both parts of the study as a “precautionary measure.”

Officials emphasized that they are still not sure what to make of the preliminary findings.

“This is a very confusing situation,” said Sandra L. Kweder, deputy director of the Food and Drug Administration’s Office of New Drugs, speaking to reporters at a hastily convened telephone news conference yesterday evening. Naproxen has been on the market since 1976, she noted, and “this is the first evidence we’ve seen that suggests there is a risk.”

She and other officials acknowledged, however, that no one seems to have studied the long-term safety of naproxen or, for that matter, any of the other popular painkillers known as nonsteroidal anti-inflammatory drugs, or NSAIDs.

It is a large class that includes such commonly taken medicines as ibuprofen (such as Motrin and Advil), naproxen (such as Naprosyn and Aleve) and the COX-2 inhibitors Celebrex (chemical name celecoxib) and Vioxx (rofecoxib).

“It may be a problem for all nonsteroidal anti-inflammatory drugs, because we’ve never had an opportunity to examine this question,” said John Breitner of the University of Washington and the Veterans Affairs Puget Sound Health Care System in Seattle, the leader of the Alzheimer’s study.

Then again, Breitner and others said, some of the warning signals emerging may be false alarms.

In the Alzheimer’s study, for example, in which 70 people experienced a stroke or heart attack out of 2,500 participants, the 50 percent increase in risk seen with naproxen may or may not prove to be “statistically significant” a scientific term that would suggest the association is not simply due to chance.

More analysis needs to be done before that question is settled, Breitner said, but he characterized the level of evidence as “enough to cause some concerns.”

Participants in the study are healthy, so it would be unethical to place them in harm’s way on the unproven chance that one of the drugs may help prevent Alzheimer’s. By contrast, Zerhouni he noted, it is often appropriate to give people drugs that carry modest risks if those people can clearly be helped by those drugs.

The [potential] benefit did not warrant taking the risk

For volunteers in the study, Zerhouni said, “the [potential] benefit did not warrant taking the risk. That’s very different than advising patients who really need the drug for pain control.”

Nonetheless, FDA officials took the opportunity to warn the public to use NSAIDs only as directed. In the case of over-the-counter NSAIDs, that means not exceeding the doses on the label or taking them for longer than recommended.

Patients taking prescription NSAIDs should talk to their doctors to reconsider whether they remain the best drugs for them, officials said -conceding at the same time that the agency had no definitive data to help doctors make those decisions.

In the Alzheimer’s study, participants who received naproxen took 220 milligrams a day, twice a day the same dose as in the over-the-counter formulation.

Kweder said the FDA was not considering any immediate regulatory action regarding naproxen, pending further review. And yesterday’s announcement was made after the close of financial markets. But the recent market declines for the companies that make Celebrex and Vioxx do not bode well for naproxen’s makers, including Roche (which makes prescription Naprosyn) and Bayer HealthCare, which makes Aleve.

Bayer spokesman William O’Donnell said the company was notified of the trial suspension yesterday and has not yet seen the data.

Bayer “is unable to comment on the study at this time,” he said. “We are investigating the matter, and in the meantime we are in agreement with the FDA’s recommendation that consumers carefully follow the instructions on the label.”

Pfizer’s stock tumbled again yesterday, closing at $24.49, down $1.46, or 5.7 percent. The stock has now fallen more than 15 percent since Thursday. Annual sales of Aleve were $148 billion, according to a Dec. 20 report from Brand Week.