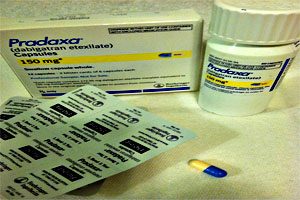 BMJ Criticizes Pradaxa’s Approval Process. Pradaxa (dabigatran), an anticoagulant manufactured by Boehringer Ingelheim, has been the subject of safety concerns in the short time that it has been on the market. Now, four reports published in the British Medical Journal (BMJ) criticize the way Pradaxa was approved, stating that BI failed to fully inform regulators of important findings.

Pradaxa is used to reduce the risk of blood clot, stroke and heart attack in patients who have nonvalvular atrial fibrillation (AF). It was the first of the new oral anticoagulants, according to MedScape. Prior to this recent class of drugs, most patients were treated with an older drug called warfarin. Patients taking warfarin have to undergo monitoring. A large part of Pradaxa’s marketing campaign was that no such monitoring would be necessary. Three BMJ reports and one editorial discuss issues with how Pradaxa was pushed for approval despite its risks.

The BMJ reports cite data from BI’s own analysis showing that the risk of bleeding would drop significantly if Pradaxa patients underwent plasma-level monitoring to determine the most appropriate dose. The reports alleged that the drug maker hid data showing that drug monitoring for Pradaxa “has the potential to provide patients an even better efficacy and safety profile than fixed-dose dabigatran and also a better safety and efficacy profile than a matched warfarin group.”

This information is vitally important, given the bleeding risks that been associated with Pradaxa. The reports point to evidence suggesting “a potentially higher bleeding risk with dabigatran than has been stated” in the phase 3 trial, RE-LY. Additionally, the reports took issue with the “design and oversight” of RE-LY and criticized the U.S. Food and Drug Administration (FDA) and to a less extent the European Medicines Agency (EMA) for approving the drug through an expedited process or despite lacking information about its safety profile.

Data from RE-LY boasted a lower risk of fatal bleeding complications with Pradaxa compared to warfarin. This was a vital component of Pradaxa’s marketing strategy, MedScape reports. However, concerns about bleeding risks have been haunting the drug since it was approved. Furthermore, one of the authors pointed out that prior to its approval, “The US agency had concerns over misreporting of events” and the company’s application for Pradaxa was initially denied.

“The BMJ has learnt that it has taken three reviews of the data [by Boehringer Ingelheim] to calculate the number of major and fatal bleeds among trial participants, and even today there are doubts whether all events have been properly accounted for.” said BMJ editor Dr. Deborah Cohen.

A worrisome risk with Pradaxa is that there is no reversal agent to stop the bleeding, as there is with warfarin. This means that any hemorrhages occurring in Pradaxa patients cannot be remedied.