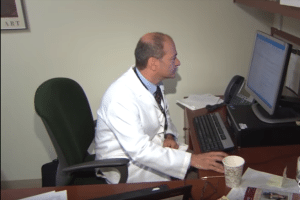 Heart Drug Safety Being Questioned. A genetically engineered drug made by a Fremont biotechnology company that was hailed as a breakthrough in the treatment of heart failure when it was approved in 2001 might actually raise patients’ risk of dying soon after treatment, researchers say.

Pooling results from three studies, the researchers found that hospitalized patients given nesiritide appeared much more likely to die in the first month after treatment than those given traditional medication such as nitroglycerin or dummy pills.

The intravenous drug has been given to more than 600,000 patients nationwide. Nesiritide, sold as Natrecor, is made by Scios, a Fremont company that became a Johnson & Johnson subsidiary in 2003.

“The public should be very alarmed,” said Dr. Jonathan D. Sackner-Bernstein, a cardiologist at North Shore University Hospital in Manhasset, N.Y., and lead author of the study, which appears in today’s Journal of the American Medical Association. He said a large, rigorous study is needed to answer safety questions.

Dr. Robert Temple, director of the Food and Drug Administration’s drug evaluation office, said there is “not a convincing case for increased mortality, but we will be looking at all available data.”

The researchers acknowledged that the studies were small and not designed to examine increased death risks, so it is possible the results were just a chance finding.

They said they considered the possibility that nesiritide simply prolonged the lives of patients who would have otherwise died earlier, and they do not believe that explains their findings.

The analysis follows a study last month linking nesiritide to an increased risk of kidney problems. Scios announced last week that it is convening a panel of outside experts to review those concerns.

The FDA saw much of the data on higher death rates before it approved the drug. The warning label on nesiritide already mentions the potential for low blood pressure, kidney problems and more deaths than are seen with nitroglycerin.

In the pooled analysis, 35 of 485 nesiritide patients, or 7.2 percent, died within 30 days of treatment, compared with 15 of 377 patients, or 4 percent, given other drugs. That 80 percent increased risk of death is higher than found in previous studies and would translate into thousands of deaths nationwide, Sackner-Bernstein said.

Sackner-Bernstein has done consulting work for GlaxoSmithKline, which owns rights to market nesiritide in Europe. His daughter owns stock in Johnson & Johnson.

Natrecor was the first new drug in a decade approved to treat heart failure, which affects about 5 million Americans and is diagnosed in more than half a million people nationwide each year. It is designed to treat the frightening breathing problems that often accompany heart failure and is a laboratory version of a hormone hearts produce to ease breathing. Skeptics say it is unclear whether nesiritide is better than old standbys like nitroglycerin.

Dr. Steven Nissen, a Cleveland Clinic heart specialist who said he was the lone dissenter on an FDA advisory committee that recommended approval of the drug, said: “If it really does increase the risk of death, then this is a major public health issue.”