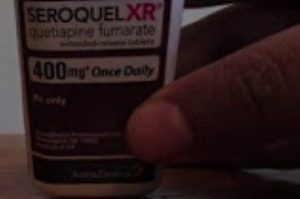 Seroquel As First-Line Depression Treatment. Last week, the U.S. Food and Drug Administration (FDA) announced that while AstraZeneca’s schizophrenia and bipolar disorder medication, Seroquel (quetiapine), can be taken to treat depression, there are side effect concerns that include the risk of a sudden cardiac death, reported the Associated Press (AP).

Now, in a unanimous vote, an FDA advisory panel found that Seroquel is not appropriate as a “first-line treatment” against depression and anxiety, said HealthDay News.

In a separate vote, said HealthDay News, citing the AP, the panel found that Seroquel could be taken as a supplement for depression—but not anxiety disorders—in those patients whose depression is not relieved from any other medications.  The panel did not vote on the medication’s use in the treatment of anxiety disorders.

According to panel chairman, Dr. Wayne Goodman, who is also a psychiatric researcher at the U.S. National Institutes of Health (NIH), “I saw no clear advantage demonstrated in efficacy.  There were side effects, and I would expect unintended consequences associated with wide-scale use of the drug,” quoted HealthDay News.

Last week, the AP quoted FDA drug reviewer Thomas Laughren, in documents posted online as stating that, “There remains a concern about longer-term risks with this drug, in particular, risks related to metabolic changes.”

The AP noted that Laughren was referring to a recent New England Journal of Medicine article concerning the link between an increase in sudden heart death and antipsychotic use.

Meanwhile, AstraZeneca apparently buried a Seroquel study completed the same year the drug was approved over concerns about the report’s disappointing results. According to an earlier report by The Washington Post, Seroquel Study 15 found that patients gained 11 pounds a year on the drug, something that would have put them at an increased risk of diabetes.

Seroquel was introduced in 1997 and has long been linked to a risk of weight gain and diabetes. Information on this risk was originally included in the “Adverse Reactions” section of its label. In 2003, the FDA required AstraZeneca to give the information added prominence by moving it to the label’s “Warnings” section.

Earlier this year, the label was updated to include data on children and adolescents, including blood-glucose levels, cholesterol, weight gain, and increased appetite.   Now, AstraZeneca faces over 9,000 Seroquel lawsuits filed by people who claim it withheld information about Seroquel’s diabetes risk. Several states that have also sued AstraZeneca have charged it illegally promoted Seroquel for unapproved uses.

In 1999, AstraZeneca touted different data at an American Psychiatric Association conference and at a European meeting. According to an earlier Washington Post article, AstraZeneca maintained this data showed that Seroquel helped psychotic patients lose weight.

The company-funded study AstraZeneca used to back that claim was conducted by a Chicago psychiatrist, and internal documents reviewed by The Post indicate that AstraZeneca officials did not hold this doctor in high regard and had concerns he modified study protocols and failed to get informed consent from patients.

They also wrote that they did not trust him with anything more complicated than chart reviews, the Post said.