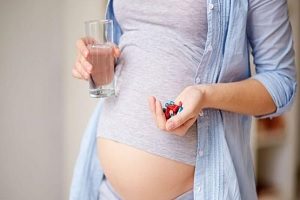 Anti-Depressants During Pregnancy. A study published in the journal Archives of Pediatrics and Adolescent Medicine reports that nearly a third of infants born to women taking anti-depressants suggesting that expectant mothers may want to consider limiting the use of these powerful drugs during pregnancy.

Thirty percent of the 60 newborns exposed to selective serotonin reuptake inhibitors (SSRIs) in the womb were found to have withdrawal symptoms. 13% of the infants’ symptoms were classified as severe said the study by Dr. Rachel Levinson-Castiel of the Children’s Medical Center of Israel, in Petah Tiqwa. (Reuters)

Newborns exhibited symptoms such as high-pitched crying, tremors, gastrointestinal problems and disturbed sleep occurred in infants in the first 48 hours after birth.  As the anti-depressant dosage taken by the mother increased, these symptoms became more pronounced.

After examining the 37 infants exposed in the womb to paroxetine hydrochloride, sold as Paxil by GlaxoSmithKline, researchers found the risk was highest among newborns exposed to 27 mg per day or more. Below 20 mg per day the risk of symptoms disappeared.

According to the study, symptoms usually did not peak until after the first day of life. The long-term effects, however, are not known. Two of infants who were exposed to the drugs suffered short seizures.

Previous studies into the effects of SSRIs on newborns have found other symptoms such as bluish skin color from lack of oxygen, rapid breathing, feeding difficulties, low blood sugar, and jitteriness.

But as we reported last week, women who are clinically depressed and are prescribed anti-depressants cannot simply count on hormonal changes in pregnancy to relieve their symptoms. Some women, therefore, face a severe catch-22 regarding whether or not to continue taking their medication.

“Because maternal depression during pregnancy also entails a risk to the newborn, the risk-benefit ratio of continuing SSRI treatment should be assessed,” Levinson-Castiel wrote in the journal Archives of Pediatrics and Adolescent Medicine. Unfortunately, “the long-term effects of in utero exposure to SSRIs have not been demonstrated clearly,” not even for those whose symptoms were severe early on, she wrote. (Reuters)

Both studies recommended that if pregnant women must continue to medicate themselves, that they decrease their drug regimen to a one drug, at the very lowest effective dose.