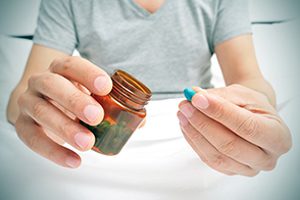 Viagra May Cause Melanoma. Viagra is a little blue pill prescribed to approximately 20 million men to solve problems with erectile dysfunction (ED). Hundreds of men are now alleging they developed melanoma after taking Viagra and those numbers are on the rise.

A total of 429 men are currently plaintiffs in an MDL (multidistrict litigation) lawsuit that is consolidated in the U.S. District Court for the California Northern District. The number quoted is as of May 15, 2017. The case is now in the discovery process, reviewing millions of pages of documents and taking depositions and statements from witnesses. The suit alleges that ‘Viagra’, manufactured by Pfizer, is linked to a significant increase in the risk of melanoma. The suit goes on to allege that Pfizer has known that a risk of skin cancer came with Viagra since the late 1990s, and made the decision to not reveal this information.

A 2014 study published in the Journal of the American Medical Association (JAMA), revealed that there was a “statistically significant” increase in the incidence of melanoma in men who used Viagra, a statement giving weight to the current allegations.

At some point later this year, it is anticipated that both the plaintiffs’ team and Pfizer will have identified their prospective experts. After that, there will be a Daubert hearing sometime at the beginning of 2018, where the court will rule on the admissibility expert evidence each side plans to offer. A Daubert hearing assures that scientific expert testimony truly proceeds from “scientific knowledge.”

National law firm Parker Waichman LLP has extensive experience and success in representing clients in pharmaceutical litigation, including Viagra. Attorneys at the firm are available to answer questions for any individuals seeking legal information for a potential lawsuit.

How Viagra Works and FDA Approval

Viagra functions by disrupting the secretion of an enzyme, phosphodiesterase type 5 (PDE5). This enzyme breaks down cyclic guanosine monophosphate (cGMP). The smooth muscles in erectile tissue relax, which leads to an erection. The plaintiff’s allegations note that this Viagra process permits melanoma to grow and some research suggests that Viagra is linked to cell mutations that lead to melanomagenesis, a condition when malignant melanocytes are produced.

The U.S. Food and Drug Administration (FDA) approved Viagra in 1998 for the treatment of erectile dysfunction and has been prescribed to millions of patients worldwide. In 2016, according the CBS News San Francisco, hundreds of men who took Viagra allege that the drug increased their risk of developing melanoma.

Plaintiffs are suing Pfizer Inc., claiming the pharmaceutical giant failed to warn them of Viagra’s alleged dangerous side effects and that the drug led to the development of melanoma. Lawsuits are being filed almost daily, according to CBS News.

Pfizer argues that there is no scientific evidence supporting a cause and effect relationship between the use of ‘Viagra’ and the development of melanoma, a deadly skin cancer which has been linked for some time to increased exposure to ultraviolet radiation.

Closer Look at the 2014 Viagra Study Dr. Wen-Qing Li, a professor of dermatology and epidemiology at Brown University, is one of the main authors of the 2014 study published JAMA. The study’s authors state that although they did not find that using ‘Viagra’ (sildenafil citrate), caused melanoma, they found that “Sildenafil use may be associated with an increased risk of developing melanoma.” The massive increase in Viagra lawsuits began after the publication of the 2014 study in JAMA, Dr. Li told CBS San Francisco.

When the study was published, Dr. Li was a research fellow at Harvard Medical School’s Brigham and Women’s Hospital. Dr. Li said he and his research colleagues “have done comprehensive analysis examining the associations between ‘Viagra’ use and risk of melanoma and found a positive association.” Dr. Li remarked that the results are based on a well-established and long-term cohort study. Li adds that there is a need for continued investigation of the relationship between ‘Viagra’ and melanoma.

By April 2016, so many lawsuits were filed that the cases were consolidated in the Northern District of California. When there are numerous lawsuits with similar allegations, an MDL may be created to speed up the process. The lawsuits are consolidated to one court before a single judge to streamline the procedure by lowering court costs and allowing a faster outcome, typically leading to increased efficiency.