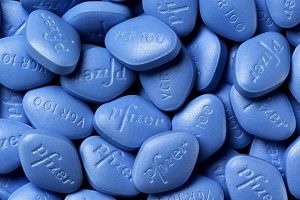 Viagra Linked To Vision Problems. An investigation into whether Viagra and other popular impotence drugs may cause permanent eye damage is unlikely to lead to a recall, federal officials and medical experts said Friday, but could prompt new warnings.

The Food and Drug Administration is looking into 38 reports of eye damage in men who took Viagra, four involving Cialis, and one with Levitra. About 30 million men worldwide have taken the drugs.

“We haven’t been able to determine that there is a cause and effect due to the medication,” FDA spokeswoman Suzanne Trevino said. “But we are taking it seriously.”

Most of the men who suffered eye damage did not go completely blind but lost part of their vision in one eye. Complicating the FDA’s investigation, many of the patients had other risk factors, such as high blood pressure, that would make them vulnerable to the particular kind of eye problem.

The condition nonarteritic anterior ischemic optic neuropathy, or NAION involves damage to the optic nerve caused by an interruption of blood supply.

Trevino said the FDA is talking with Pfizer Inc., Viagra’s manufacturer, about formally disclosing the risk in its prescribing literature for doctors. Eli Lilly & Co., which makes Cialis, recently changed its information to acknowledge reports of eye damage.

Dr. Howard Pomeranz, a professor of ophthalmology at the University of Minnesota, reported a suspected link between Viagra and eye damage in a medical journal article published in March.

“This particular eye problem should be added to the list of side effects that patients have access to,” Pomeranz said Friday. But, he added, the medical evidence at this point would not warrant withdrawing the drug.

“I’m not recommending that men stop taking this drug,” he said. “It’s very good for what it’s prescribed for.”

However, Pomeranz said, patients who already have NAION in one eye should be strongly cautioned about the risk of using Viagra. And any patient who experiences blurriness or a loss of peripheral vision should stop taking such medications and consult a doctor immediately.

For patients who want to know whether they may be at risk, an eye exam may help answer the question. Doctors say one risk factor for NAION is tightly bundled nerves and blood vessels in the back of the eye. An eye doctor can identify that condition.

Medical factors that increase the risk of NAION include high blood pressure, high cholesterol and diabetes. Older people also are more likely to have the problem.

Dr. Michael Lee, a neuro-ophthalmologist at the Cleveland Clinic Foundation, treated a 67-year-old architect who had received a sample pack of Cialis from his primary care doctor.

One morning, two hours after taking the drug, the patient noticed a blurry patch in the bottom of his field of vision in his right eye, Lee said. His vision recovered by the next morning.

The patient took the drug three more times, with the same effect. Then he took another dose. That time, the blurry patch did not go away. The damage was permanent, Lee said.

The patient had two risk factors for NAION: high cholesterol and an especially small channel for blood vessels that run through the optic nerve behind the eye.

In a statement, Pfizer said there was no evidence that NAION occurred more frequently in men taking Viagra than in men of similar age and health who did not take the drug.

“Most of the reported cases in which NAION has occurred in men taking Viagra have involved patients with underlying anatomic or vascular risk factors,” the company said. “This makes it impossible to determine whether these events are caused by the patient’s underlying risk factors, anatomical defects, Viagra, or a combinations of these factors.”

Eli Lilly spokeswoman Kindra Strupp said the company has updated its prescribing literature to reflect the reports of NAION. But “we don’t see any cause-and-effect link,” she added. “It certainly has not been established at this point.”

Pomeranz said he disagreed with the drug companies’ assertion that any association between the medications and eye damage was coincidental. In the 20 or so cases he reviewed, the onset of eye problems followed the patient’s taking of Viagra — usually by several hours, but sometimes by as few as 45 minutes.

“It’s really the time connection between when the patient took the drug and when he noticed the loss of vision that convinces me there’s a link,” Pomeranz said.

His medical journal article conceded that “a definite causal relationship cannot be established at this time.” But in view of the ever-growing use of such drugs, he wrote, the FDA must investigate.

“It is critical that irreversible ocular side effects such as NAION be ruled out in this class of drugs,” he wrote.

The situation presents a common dilemma for the FDA: Although drugs may be tested on several thousand people before their approval, rare side effects may not emerge until many more have used the medication.

Some doctors said Friday that patients inquiring about the potential risk of eye damage were not overly alarmed.

“It’s way out of proportion,” said Dr. Steven Schwartz, chief of the retina division at the Jules Stein Eye Institute at UCLA. He sent three cases to the FDA, but as in the other reports received by the agency, the patients had other risk factors for NAION.

Federal health officials are examining rare reports of blindness among some men using Viagra and Cialis. The warning labels of both impotence drugs, as well as Levitra, currently list the following side effects, according to the drugs’ Web sites:

Viagra: “Less common side effects that may occur are temporary changes in color vision (such as trouble telling the difference between blue and green objects or having a blue color tinge to them), eyes being more sensitive to light or blurred vision.”

Cialis: The drug “may uncommonly cause vision changes, such as seeing a blue tinge to objects or having difficulty telling the difference between the colors blue and green.”

Levitra: The drug “may uncommonly cause vision changes, such as seeing a blue tinge to objects or having difficulty telling the difference between the colors blue and green.”