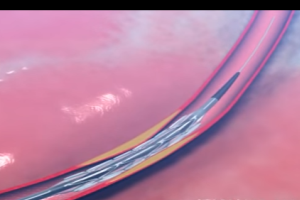 Drug coated stents were developed as a way to keep blood vessels open after an angioplasty. Stents are lattice-like devices that act like scaffolding to hold a blood vessel open. The drug coating is supposed to keep scar tissue from re-narrowing the artery, a common problem with the bare metal stents.

In 2006 the Cleveland Clinic published an analysis of fourteen stent studies covering more than 6,000 patients that found those with drug coated stents were four to five times more likely to suffer from blood clots than those implanted with bare metal stents.

The calculations were made on the on the basis of 2004 Swiss stent prices. At that time, the Cypher stent averaged $3300 USD and the Taxus Stent cost about $2807 USD, while bare metal varieties averaged only $1828 USD. The study’s author wrote in the medical journal Lancet that “if used in all patients, drug eluting stents are not good value for money, even if the prices were substantially reduced.”

The Swiss researchers did find that drug coated stents were a good value for a limited number of patients. These patients were those at high risk with small vessels measuring less than 3 millimeters or bypass-graft stenting.

The study authors wrote “targeted stent use could be the preferred strategy today. Lower prices of drug-eluting stents alone are unlikely to result in such stents being cost effective in all patients, even if the problems of late stent thrombosis are solved with new of drug-eluting stents,” the researchers concluded.

But NICE isn’t just talking about limiting the use of drug coated stents as the Swiss researchers suggested. If NICE’s guidance on stents were to be adopted, U.K. patients would either get free treatment with bare-metal stents funded by the National Health Service, or have to pay for the drug-coated devices themselves.

In the event that NICE does substantially curb the use of drug coated stents, stent manufacturers have the option to appeal this decision. If their efforts are still unsuccessful, they could seek legal action.