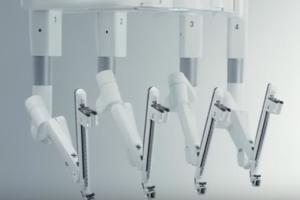 Study That Fails To Support da Vinci. Once again, Intuitive Surgical has been faced with a study that fails to support the use of its da Vinci surgical robot. The study, published Thursday in The New England Journal of Medicine (NEJM), found that the rate of complications was similar between bladder cancer patients who had their bladders removed robotically and those who underwent a traditional invasive open procedure.

To conduct the study, 118 patients were randomly assigned to undergo an open or robotic surgery to have their bladders removed in a procedure known as radical cystectomy. All of the participants were recruited at Memorial Sloan Kettering Cancer Center between 2010 and 2013. Radical cystectomy is commonly used to treat patients who have invasive, nonmetastatic bladder cancer.

In a letter to the editor, the authors of the study note that this procedure is linked to significant complications perioperatively and has a long recovery time, especially among older patients who smoke and have other illnesses. Previous research suggests that the rate of complications may be lower with robotic surgery, but the data from those studies are not compelling, the authors state.

“This randomized trial showed similar rates of perioperative complications and lengths of hospital stay among patients who underwent robot-assisted surgery and those who underwent open surgery. The confidence intervals argue against a large benefit of robotic techniques with respect to perioperative morbidity.” the authors wrote. They also noted that these findings may not be generally applicable to all clinical settings because the surgeons selected to perform the procedures were highly experienced and located at a single, high-volume referral center.

According to The Wall Street Journal, the average cost of bladder removal is about $16,250; this is about ten percent higher than the cost of open surgery.

Intuitive has been faced with an onslaught of safety issues regarding the da Vinci surgical robot. FierceMedicalDevices.com reports that last year, researchers at Johns Hopkins found that the rate of complications with robot-assisted surgery is substantially underreported.