People who underwent a total hip replacement with the Wright Medical Profemur hip implant were probably under the impression that they would have a better quality of life after surgery.

They were also possibly told that this implant would last for years. Unfortunately, this has not been the case for some patients. As it turns out, the Wright Medical Profemur hip implant has a tendency to fail early, forcing these patients to go through another surgery to remove the implant.

If you or someone you know has had surgery related to this device, our attorneys would like to hear from you. Parker Waichman LLP offers free case evaluations for anyone who has questions about their legal rights.

If you have undergone a hip implant, you should know that the devices implanted in these surgeries are meant to last at least 15 years. A total hip replacement surgery is a complicated, invasive operation that no one should have to undergo unless absolutely necessary. The problem with the Wright Medical Profemur systems is that they fail within just a few years, which forces patients to undergo what is known as “revision” surgery to remove the devices and replace the allegedly defective device with a different device. 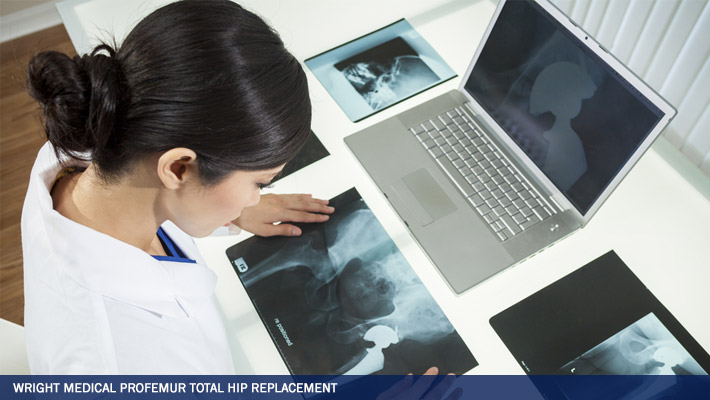 In 2009, the Australian Orthopaedic Association found that one component, the Wright Profemur Z femoral stem, had a revision rate of 11.2 percent in only three years; this means that one in every nine patients had to undergo revision surgery. Other complications associated with the Wright Medical Profemur hip system include:

Like metal-on-metal hip implants and numerous other medical devices, the Wright Medical Profemur was approved without clinical safety tests, through a route called “510(k)” which allows manufacturers to sell devices without proving their safety or effectiveness through clinical testing; they only have to prove to federal regultors that the device is similar enough to a preceding device that has already been approved and is on the market.

Parker Waichman notes that the Profemur is not the only metal-on-metal hip implant that has spurred personal injury lawsuits against Wright Medical. The company is also facing lawsuits alleging that the Wright Conserve metal-on-metal hip implant caused serious complications, such as metal poisoning (metallosis). As with other metal hip device lawsuits, plaintiffs in the litigation allege that the Conserve caused injuries due to its metal-on-metal design, which allegedly causes metal particles to be leeched into the body when the surfaces of the implant rub together. In addition to metallosis, plaintiffs allege that the defective design of the Conserve led to adverse events such as inflammation; difficulty walking; implant loosening; tissue death; and ultimately, the need for revision surgery to remove and replace the implant.

Metal-on-metal hip devices, in general, have raised safety concerns because they are associated with a higher than expected failure rate. Typically, a total hip replacement is expected to last 10 to 15 years. When a hip replacement fails, it means that it is no longer functional due to some type of injury or complication and needs to be removed. The procedure to remove the failed hip implant. Plaintiffs in the Wright Conserve litigation allege that they had to undergo an early revision surgery, a procedure that is painful, costly, and complex, due to the allegedly faulty nature of the metal-on-metal hip implant.

In 2012, the U.S. Judicial Panel on Multidistrict Litigation (JPML) consolidated Wright Conserve lawsuits into a federal multidistrict litigation (MDL) in the U.S. District Court for the Northern District of Georgia before U.S. District Judge William S. Duffey, Jr. This was the third MDL to be established for metal-on-metal hip implant lawsuits. MDLs centralize lawsuits with similar allegations into one court before one judge. Cases are consolidated in this manner to make litigation more efficient, because proceedings become streamlined and MDLs help avoid duplicate discovery and conserve court resources.

Parker Waichman comments that Wright Medical has agreed to settle personal injury lawsuits alleging injuries from its metal-on-metal Conserve, Dynasty, or Lineage hip implants. Plaintiffs in the litigation similarly allege that these hip devices are defectively designed and caused injuries, and that Wright Medical failed to disclose these risks. On November 2, 2016, Wright Medical Group announced that it entered into a settlement agreement to resolve lawsuits in the Conserve MDL (In Re: Wright Medical Technology, Inc., CONSERVE® Hip Implant Products Liability Litigation, MDL No. 2329) and consolidated lawsuits in California state court (In re: Wright Hip System Cases, Judicial Council Coordination Proceeding No. 4710). Wright also entered into a Settlement Agreement with three of its insurance carriers, the company announced.

Wright Medical agreed to pay $240 million to settle 1,292 lawsuits alleging injuries from the Conserve, Dynasty, or Lineage hip implants that meet the eligibility requirements of the Master Settlement Agreement (MSA). Of the total settlement amount, $180 million would be funded through cash and $60 million from insurance recoveries. In order to meet eligibility requirements for the Wright Medical metal-on-metal hip implant settlement, plaintiffs must have a lawsuit pending or tolled in the MDL or in the California litigation and must have undergone revision surgery within eight years of receiving the metal-on-metal hip replacement named in the lawsuit. Plaintiffs who have undergone bilateral revision surgeries, meaning they needed revision surgeries in both hips,, may be considered as two claims as long as both hip implants meet eligibility criteria separately.

In order for the $240 million Conserve metal-on-metal hip implant settlement to move forward, 95 percent of eligible plaintiffs must agree to the MDA. The final settlement amount will vary based on various factors, including how many claimants agree to opt-in and the combination of products named in the personal injury lawsuits.

The first Wright Conserve bellwether case went to trial in November 2015. After two weeks of trial, a Georgia federal jury
awarded $11 million to the plaintiff. The verdict consisted of $10 million in punitive damages. Punitive damages are awarded when a jury decides that a defendant needs pay extra as punishment, such as when the defendant is found to act with gross negligence. Punitive damages are often awarded in the hopes that other companies will avoid engaging in similar activities.

The plaintiff’s Wright Conserve lawsuit was filed into the MDL in 2013. Her case was the first lawsuit chosen for bellwether trials. According to her lawsuit, she was implanted with the Conserve metal-on-metal hip implant in April 2006. The hip device lasted only six years before failing, prompting her to undergo revision surgery to replace the implant. During the Wright Conserve revision surgery, her lawsuit alleges, surgeons found fluid buildup, dead tissue, and tissue damaged by the presence of metal debris. The plaintiff was a ski instructor for over 47 years, but she alleges that her favorites activities are now severely limited due to complications from the Conserve hip implant.

If you or someone you know has been implanted with the Wright Profemur hip system and suffered alleged injuries, you may have valuable legal rights. Please fill out our online form or call 1-800-YOURLAWYER (1-800-968-7529) to find out more today.