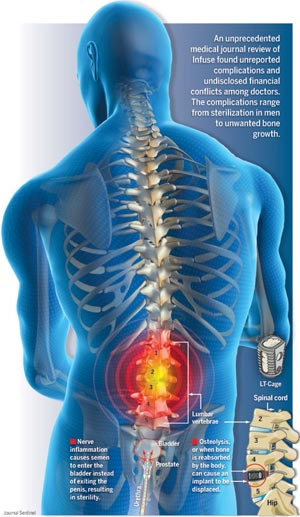 Medtronic Infuse Side Effects. Off-label use of Medtronic Inc.’s Infuse bone graft product in cervical spine surgeries, as well as lateral approach or posterior approach spinal procedures, has been linked to serious, and even life threatening side-effects.

Some of these Medtronic Infuse injuries include ectopic or uncontrolled bone growth at or near the site of the surgery; ongoing or chronic radiating pain in the legs or arms; male sterility, retrograde ejaculation, or other uro-genital injuries; nerve injuries causing severe and chronic pain; and even cancer.

In cervical spine surgeries, an off-label use of Infuse, some patients experience acute severe neck swelling several days after surgery resulting in death or permanent injury. Medtronic has been accused in lawsuits of aggressively promoting unapproved uses of Infuse, and it has also been alleged that research sponsored by the device maker downplayed many serious Infuse bone graft side effects.

Our defective medical device lawyers are aggressively investigating these allegations

Our defective medical device lawyers are aggressively investigating these allegations, and would like to hear from anyone who suffered a serious Infuse bone graft complication.

If you sustained a serious injury after undergoing an off-label Medtronic Infuse procedure, you may be eligible for compensation for your medical bills, lost wages, and pain and suffering. We are currently offering free legal consultations to anyone interested in filing a Medtronic Infuse lawsuit.

If you or a loved one were injured due to a procedure where this product was used inappropriately, it is vital you contact our Medtronic Infuse lawyers as soon as possible to protect your legal rights. This is the ONLY type of spine surgery for which Infuse is approved, though the FDA did later grant clearance for its use in two types of dental surgeries. Despite its limited approval, it has become clear that Infuse bone graft is frequently used off-label in other spine procedures, especially cervical (neck) spine surgery, as well as in lateral approach (through the side of the body) or posterior approach (through the back of the body) spinal procedures.

Unfortunately, it has also become apparent that such off-label use puts patients at risk for serious, and even life-threatening, injuries.

Acute severe swelling of the neck several days after surgery

Ongoing or chronic radiating pain in the legs or arms (i.e., neuritis, radiculopathy, or radiculitis);

Retrograde ejaculation, or other uro-genital injuries in male patients

In 2008, the FDA warned Infuse bone graft and similar products had caused serious problems when they were used off-label in cervical spine surgeries.

At the time, the agency said that it had received dozens of reports of side effects linked to off-label Infuse procedures, mainly swelling of neck and throat tissue, which resulted in compression of the airway and other structures in the neck.

In November 2008, Medtronic disclosed that the U.S. Department of Justice (DOJ) was investigating the off-label use of a Medtronic’s Infuse bone graft. According to a report from The Wall Street Journal, at least 280 reports of side effects involving Infuse had been made to the FDA when the investigation was announced.

About three-quarters of those reports involved off-label use. While doctors are permitted to use approved medical devices in any way they see fit, it is illegal for manufacturers to market products based on such uses.

Did Medtronic Downplay Infuse Side Effects?

Plaintiffs in Infuse bone graft lawsuits allege that Medtronic either negligently or fraudulently misrepresented the risks and benefits of Infuse. In June 2011, such allegations were given credence by a study published in The Spine Journal which disclosed that Medtronic-paid researchers had failed to report serious complications from Infuse, including cancer, sterility in men, infections, bone dissolution and worsened back and leg pain.

The article said these complications occurred in 10 to 50 percent of patients who got the product in 13 Medtronic-funded clinical trials conducted between 2000 and 2010. The Spine Journal review also examined payment data from Medtronic to the doctors who co-authored the Infuse studies, and found that the median amount the company paid to doctors was at least $12 million to $16 million per study (though it should be noted that none of the royalty payments related to Infuse.)

A Motion to Dismiss a consolidated class action lawsuit recently brought over Medtronic’s Infuse and being tried in the U.S. District Court for the District of Minnesota was denied on September 29, 2014 by the judge overseeing the case.

The lawsuit was brought on behalf of a class group represented by the West Virginia Pipe Trades Health & Welfare Fund, Employees’ Retirement System of the State of Hawaii, and Union Asset Management Holding AG.

Medtronic and some former and current Medtronic officers, consultants, and executives were involved in an arrangement created to mislead investors regarding Medtronic’s financial position, specifically concerning the safety and efficacy of Infuse, according to the allegations.

The allegations also include that early research showing the product’s safety and efficacy were revealed to be inaccurate based on later studies published in May and June 2011 in The Spine Journal. The journal articles revealed that the incidence of adverse events associated with Infuse were 10-50 times greater than previously published rates.

Medtronic, in collaboration with physician consultants, was also allegedly involved in a scheme to defraud investors by manipulating the early research. The scheme led to Medtronic’s stock trading at falsely inflated prices during the Class Period, then plummeting about 25 percent from its highest level once the truth was exposed, according to lawsuit allegations.

If you or someone you know sustained an injury due to off-label use of the Medtronic Infuse bone graft, you have valuable legal rights. To learn how our Medtronic Infuse lawyers can help you, please fill out our online form, or call 1-800-YOURLAWYER (1-800-968-7529) to discuss your case with one of our experienced Medtronic Infuse Bone Graft lawyers.