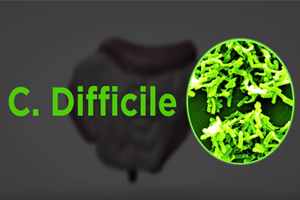 C. Diff Is On the Rise. C. diff has been making the news lately and now, a new antibiotic resistant strain of the diarrheal illness is showing up in health care facilities nationwide, reports the East Volusia News-JournalOnline.com. The federal Centers for Disease Control and Prevention (CDC) also reports C. diff has been seen in all 50 states. Meanwhile, the Infectious Diseases Society of America and the Society of Healthcare Epidemiology of America have both published guidelines meant to minimize the spread of the C. diff superbug that include avoiding the overuse of antibiotics.

Clostridium difficile—widely known as C. diff—has been a long-recognized problem in healthcare facilities but, now, officials from the Florida Department of Health are beginning to see a deadlier form of the germ in hospitals there as far back as 2000, reports the East Volusia News.  According to the report, the infection is becoming especially problematic in people over age 60.  A review conducted by the Florida Health Department revealed that nearly a decade ago, C. diff cases were under five in each 1,000 discharges for people between 80 and 90 years of age. By 2006, the figure had “more than quadrupled”, the East Volusia News said.

A recent report issued by the Association for Professionals in Infection Control and Epidemiology are seeing the illness in more patients that first believed.  The report found that C. diff, which was thought to have affected 13 of every 1,000 hospital discharges, is hitting at a rate of 6.5-to-20 times greater, making it the number two super bug, according to East Volusia News.  Methicillin-Resistant Staphylococcus aureus—MRSA—is the top super bug affecting approximately 36 of every 1,000 discharges, the East Volusia News added.

C. diff is Generally Transmitted by Hand Contact with Items Contaminated by Feces

C. diff is generally transmitted by hand contact with items contaminated by feces, causing symptoms ranging from severe diarrhea to deadly sepsis, which seems to worsen in patients who have recently been on or are currently on antibiotics, reported the East Volusia News.  “What happens is the antibiotic you will give them will damage or destroy the friendly bacteria” that can fight off C. diff, said Dr. Richard Duma, director of infectious diseases at Halifax Health, to the East Volusia online paper.

The Canadian Press also just reported that a recent study found that the popular antibiotic Cipro upsets the digestive system’s bacterial balance with such effects lasting longer than first believed.  The paper noted that because antibiotics—which all kill off some amount of beneficial bacteria—cannot isolate one bacteria type, people can develop problems such as yeast infections or, C. diff.  What remains unclear, The Canadian Press notes, is the damage actually done within the body’s bacterial “flora” environment, pointing out that such flora—the good bacteria—are necessary for good health and warding off infections.