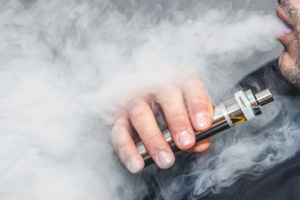 The use of e-cigarettes, also known as “vaping,” has been in the news in recent months, especially as they relate to adolescents and teenagers. Not only are e-cigarettes addictive, but they also have unknown ingredients that may be harmful to users.

What is Causing So Many People to Suffer Breathing and Lung Problems?

Recent reports of 22 people being hospitalized for severe breathing and lung-related conditions after vaping have raised questions about the safety of e-cigarettes.  According to a news article published by www.nbcnews.com, the 22 people who were hospitalized, many of which are teenagers and young adults, all inhaled an e-cigarette device which preceded the development of the breathing difficulties.

The individuals hospitalized in Minnesota were all teenagers.  The Chief Medical Officer for Children’s Minnesota indicated that upon admission to the hospital, the original diagnosis for these teenagers was thought to be a respiratory infection like pneumonia. However, the teenagers did not get better with treatment but instead got worse.  Some teenagers required intensive care and assistance with breathing.  The Chief Medical Officer for Children’s Minnesota stated that the teenagers “have progressed to have significant difficulty with their breathing and increasing lung distress.”

While there is a common theme among all 22 individuals – that they used e-cigarettes before being hospitalized – the specific reason or mechanism for why these individuals are suffering lung and breathing problems is unclear.

One affected individual, a 26-year-old Wisconsin man, was hospitalized just 1 day after vaping from a new cartridge.  The man’s condition got worse throughout the day upon admission to the hospital, and by “nightfall, his lungs were filling with fluid and doctors had to put him into a medically induced coma.”  The man’s brother stated the cartridge was purchased off the street, and the brand is “Dank Vapes,” which is a company that went out of allegedly went out of business a few years ago.

One possibility as to why 22 individuals were hospitalized with similar breathing and lung problems is that the e-cigarettes are contaminated in some way. However, it is unclear whether each of the 22 individuals was using the same brand of e-cigarette.

Because the FDA has not established rules and regulations for the e-cigarette industry, manufacturers are selling their products without identifying all ingredients contained in each e-cigarette cartridge.  Without knowledge of what customers are smoking, it is difficult to determine which ingredient(s) may be to blame for causing lung-related illnesses.

The recent incident involving 22 individuals raises “serious concerns and underscore[s] why the FDA should be reviewing e-cigarettes and determining their health impact before they are allowed on the market,” according to a statement released by the Campaign for Tobacco-Free Kids.

The Wisconsin Department of Health has contacted the Centers for Disease Control and Prevention to coordinate an effort among the affected states to determine what caused nearly 2 dozen individuals to suffer similar health conditions after using e-cigarettes.

Have you or a loved one suffered lung damage caused by e-cigarettes, Juuls, or vape devices?