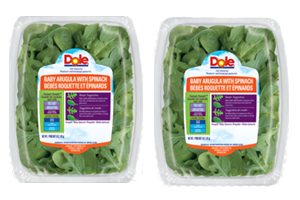 The outbreak has sickened at least 146 people in 23 states, according to the Centers for Disease Control and Prevention. One person has died and 76 others have been hospitalized, some with kidney failure.

In a break that could help isolate the source of the outbreak, New Mexico’s public health laboratory isolated E. coli from an opened package of spinach, the CDC said. Spinach had only been the suspected source of the bacteria, based on interviews with victims.

The package of Dole brand baby spinach came from the refrigerator of a patient who ate some of the leafy greens before becoming ill, New Mexico department of health officials said. The New Mexico laboratory completed “DNA fingerprinting” tests late Tuesday, and state and federal officials then matched it to the strain of the bacteria E. coli O157:H7 implicated in the outbreak.

That find could help investigators narrow their hunt for the source of the contamination to a specific producer or processor.

Dole is one of the brands of spinach recalled Friday by Natural Selection Foods LLC, of San Juan Bautista, Calif.

Meanwhile, FDA inspectors began visiting California farms this week, seeking signs of past flooding or cases in which contaminated surface areas had come into contact with crops. They also were looking for potential sources of bacteria inside packing plants.

California produces 74 percent of the nation’s fresh spinach crop. The Salinas Valley accounts for roughly three-quarters of the state’s share, and it has been the focus of the investigation. The area has links to both Natural Selection Foods and a second company that’s also recalled fresh spinach products, River Ranch Fresh Foods of Salinas.

Among those sickened, 71 percent were women. Among those victims who could provide a date, they reported falling sick between Aug. 19 and Sept. 5, according to the CDC.