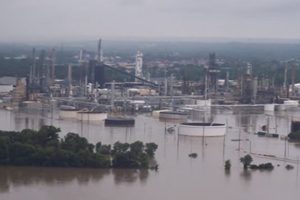 Coffeyville Resources estimates that approximately 300 homes would qualify for the program.  To take advantage of the program, homeowners must contact the company within the next 30 days.  Homes eligible for remediation are properties that Coffeyville Resources determined were the hardest hit by the oil spill.  The company said that officials from the town of Coffeyville are behind the plan, as it provides the quickest way for the community of 11,000 people to get back on its feet.

The June 30th oil spill occurred as the town was bracing for a massive flood. Coffeyville Resources was attempting to shut down the refinery before it was inundated with flood waters.  A pump apparently malfunctioned and allowed oil to continue flowing to the refinery’s main storage tank until it overflowed.  The problem went unnoticed for some time, and allowed as much as 71,000 gallons of oil to escape.  At a town meeting following the spill, attendees wondered why the refinery waited so long to shut down when it was well known that the flood was coming.  Coffeyville Resources defended its actions, saying that the flood was more severe and hit the town much sooner than had been anticipated.

The Town Was Covered In A Black Muck

Once the flood waters were gone, much of the town was covered in a black muck – residue from the oil spill.  Thousands of homes will require extensive repair, while others are beyond saving and have been condemned.  In a state where farming is still an important occupation, many farmers are facing dire financial prospects as a result of crop failure from contaminated soil.  While this year’s crops are obviously a total loss, no one knows the toll the oil spill will take on subsequent growing seasons.  Cleanup of contaminated soil is no easy matter, as the old soil must literally be scooped up and replaced with new soil.  It is a time consuming and expensive process.  One farmer told the Wichita Eagle that he expects his crop losses this year to total more than $50,000.

There are also concerns regarding long-term health consequences related to the oil spill.  Those involved in the cleanup of oil spills have reported skin and respiratory problems years later.  Prolonged exposure to contaminated soil or water can affect the nervous system, blood and kidneys.  The Environmental Protection Agency (EPA) has conducted test of the air, soil and water around the spill, and has said that it detected no dangerous levels of chemicals.  Still, residents of Coffeyville are reporting the skin rashes, headaches and nausea associated with oil spill cleanups.