Home » Fracking Could be Costly for New York Roads 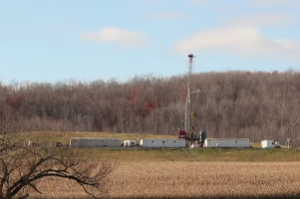 Commence Of Fracking Operations In New York Offers Many Benefits. New York State has been promised huge economic benefits if gas drilling via hydraulic fracturing is allowed to commence in much of the state. But fracking opponents continue to warn that the environmental consequences of opening up New York’s Marcellus shale to fracking could outweigh most of those supposed benefits.  Now, one environmental group is warning that fracking consequences could also include road damage from truck traffic that could cost New York State and its municipalities millions of dollars to repair.

“It will be necessary to reconstruct hundreds of miles of roads and scores of bridges and undertake safety and operational improvements in many areas” where Marcellus Shale drilling is expected to take place, the report states.

The report estimates that natural gas drilling in the Marcellus shale could increase heavy truck traffic on local roads by as much as   1.5 million more trips per year.   Repairing road damage caused by those trucks could cost state and local municipalities between $121 million to $222 million PER YEAR.

The posting of the DOT draft report comes just a little over a month since the New York Department of Environmental Conservation (DEC) recommended that fracking be allowed on private lands in New York.   If the DEC’s recommendation is adopted by the state, approximately 85 percent of the Marcellus Shale in New York would be accessible to natural gas extraction via fracking.

For its part, the DEC is already disavowing the DOT’s draft report, stating it is based on obsolete data.  A spokesperson for the DEC told Press Connects that the department’s final regulations or fracking, which it is currently working on, will include mitigation measures associated with road damage.