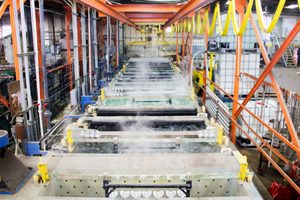 Reilly Plating Company Had A History Of Safety Violations. A Melvindale, Michigan metal finishing plant that was the sight of a hydrochloric acid leak earlier today had a history of safety violations, and was operating without an air quality permit.   Though no injuries were reported, the leak at the Reilly Plating Company resulted in the evacuation of thousands of people, including hundreds of school children. Most of those evacuated remained out of their homes this evening, and officials could not say yet when they might be able to return.

The Reilly Plating Company reported the leak of hydrochloric acid at approximately 7:20 a.m. today.   About 3,000 gallons of the toxic chemical leaked from the plant, sending a  cloud over Melvindale, a city of about 11,000 people located 8 miles outside of Detroit.   The hydrochloric acid leak was not being considered a spill, because the chemical was able to flow into a 500-gallon tank located beneath it.

At least 3,000 people were evacuated from a 2 square mile area around the plant.   The evacuees included students from nearby Melvindale High School and Strong Junior High School.  All of the evacuees who live or work in the area of Oakwood and Dix roads, including a small trailer park and a senior community center, will remain evacuated until further notice, officials said.

Melvindale officials said that the evacuations were precautionary, and investigators from the Environmental Protection Agency (EPA) were on the scene to monitor air quality around the Reilly Plating Company facility.   While the hydrochloric acid posed no immediate danger to people in the area, officials were concerned that could change if the area was hit with a rainstorm that had been forecasted for later this evening.  Hydrochloric acid is a highly corrosive liquid that can cause burns if it comes into direct contact with skin or eyes. With rain, the chemical potentially can turn into gas and be breathed in, burning lung tissue and causing respiratory problems.

Meanwhile, the Detroit Free Press has reported that the Reilly Plating Company has had a history of safety violations.   The facility was apparently operating without an air quality permit, although it had been working with Michigan Department of Environmental Quality to get one.   According to the Detroit Free Press, Reilly Plating also has had a history of water quality violations dating back to 2004, and has been in trouble for allowing higher levels of some chemicals to escape the plant than is permitted by law.   And in May 2001, the EPA fined Reilly Plating for record keeping violations.

It could be at least a week before residents of Melvindale will be able to return home. Crews have begun working to empty the container of hydrochloric acid, and residents will be barred from the area until that process is completed.