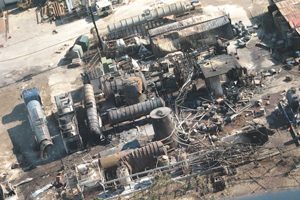 T2 Laboratories Explosion in Jacksonville Has Resulted In Deaths. An explosion and fire at T2 Laboratories in Jacksonville, Florida has resulted in the deaths of at least 3 people, and left several others injured. According to television news reports, T2 Laboratories produces  gasoline additives and chemical solvents, and there was concern that toxic chemicals could endanger people in close proximity to the plant.

Dozens of fire and rescue crews where battling what one official called a “hellish inferno” at T2 Laboratories located along Faye Road in an industrial area on the waterfront in north Jacksonville.  More than 70 firefighters and every hazardous-materials unit in Jacksonville was reportedly at the scene, and crews where using foam and other chemicals to fight the blaze.  Police cordoned off the area near Faye Road, closed off highway exits to the site and set about evacuating office workers from the city’s industrial section.  A half-mile area around the T2 Laboratories was being evacuated as a safety measure.

Large Doors At The Hotel Where Blown Off

Witnesses to the T2 Laboratories explosion reported hearing a loud boom around 1:30 p.m. accompanied by a flash and followed by a mushroom cloud of smoke. Buildings shook, and people in the area described windows shattering and light bulbs being shaken out of their sockets from the impact of the blast.  Employees at a Holiday Inn several miles from the T2 Laboratories site reported that large doors at the hotel where blown off their hinges as a result of the blast. Other witnesses reported that fire and smoke from the explosion shot 20 feet into the air, and could be seen from miles around.

The T2 Laboratories plant is located across the street from the JEA power generating facility, and the explosion knocked out two of the power plant’s three generating units. Management at JEA said that the damage caused by the explosion was not permanent, and they did not anticipate any service interruptions.  However, all non-essential personnel at JEA had been evacuated as a precaution.

Television news reports stated that 3 people where killed in the explosion and 7 others where injured.  Rescue officials refused to confirm those reports, but did say three people where missing. Originally 6 individuals where said to be missing, but three people were later found. Hospitals in Jacksonville were put on mass-casualty alert and local television reporters said they saw several rescue units leaving the scene with lights and sirens.

According to its website, T2 Laboratories is the world’s only supplier of Ecotane, a gasoline additive. The website said that T2 Labs specializes in the design and manufacture of low environmental impact specialty chemicals that replace conventional toxic and dangerous industrial chemicals.