Home » PCA, Peter Pan Salmonella Outbreaks Have Much in Common 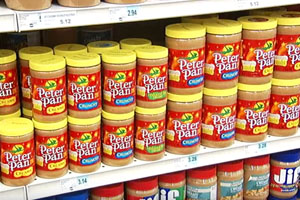 Peter Pan Salmonella Outbreak. The salmonella outbreak linked to peanut products made by Peanut Corp. of America (PCA) and the Peter Pan salmonella outbreak that occurred just a couple of years ago apparently have more in common than just peanut butter.  According to an article in Newsday, the strain of salmonella that caused the 2006-2007 Peter Pan outbreak was among five different strains recently linked to PCA.

That strain, Salmonella Tennessee, sickened over 700 people just two years ago.  In February 2007, that outbreak prompted a recall of ConAgra’s Peter Pan and Great Value Peanut Butters. ConAgra faulted a leaky roof and malfunctioning sprinkler system at its production facility for causing the salmonella contamination. The plant in Sylvester, Georgia was closed due to the recall, but reopened later that summer.

The Salmonella Tennessee found this year turned up in Minnesota in an unopened can of King Nut Peanut Butter made by PCA.  Four other salmonella strains, including the Salmonella Typhimurium type causing this year’s outbreak, were found at PCA’s Blakely,  Georgia facility.

According to Newsday, the PCA plant involved in this year’s outbreak is only 70 miles from the ConAgra facility that made tainted Peter Pan.  There is some speculation that the peanuts supplied to ConAgra prior to that outbreak could have come from the same farmer who supplied PCA during the current contamination.  The CDC is working now to find any links between the PCA Salmonella Tennessee and that involved in the Peter Pan outbreak.

As was the case with the Peter Pan outbreak, it is looking like plant conditions may have contributed to salmonella contamination at PCA.  Like the ConAgra plant, the PCA plant had a leaky roof.  But inspectors have also found roaches and mold.  Media outlets have also quoted a PCA employee who claims to have once found a rat in the factory’ peanut roaster.

That facility has since been closed, and PCA has recalled peanut butter, peanut paste and other ingredients made there.  Scores of other firms that were supplied by PCA have also recalled hundreds of foods made with PCA products.  The recalls are occurring on  a daily basis, and the Food & Drug Administration has had to set up an online, searchable database to help consumers track the recalls.

Despite the intriguing similarities between the PCA and Peter Pan salmonella outbreaks, it is important to note that ConAgra is not implicated in the current crop of illnesses.  The company is not among those that have issued recalls, and it recently published a statement affirming that neither ConAgra Foods nor any of its suppliers purchase any ingredients from  PCA.

According to the CDC, 550 people in 43 states have become sick from salmonella linked to PCA products.  The outbreak may have contributed to 8 deaths.