Home » Accuser Steps Out Of Shadows 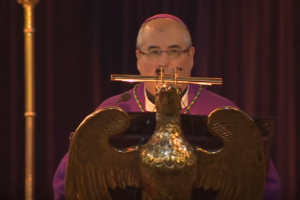 Toledo firefighter Anthony comes stood before dozens of co-workers last week during a union meeting in downtown Toledo and bared his soul: He said he had been molested by a priest.

For years, he says, he was too ashamed to talk about his alleged abuse by former cleric Dennis Gray.

When he filed a suit against the onetime priest in September, he told his lawyer to use the generic identity John Doe – the same one used by rape victims.

But yesterday, inspired by the stories of abuse survivors, the 33-year-old put his name on what has become the largest sexual misconduct case in the history of the Toledo diocese.

In a rare motion, his lawyer filed an amendment in Lucas County Common Pleas Court to change John Doe to Anthony Comes.

“Itâ€™s time to stand up and do this with dignity,” says the father of two young children. “I want people to know who I am.”

After reading The Blade’s series on clerical abuse this month, he says he was tired of concealing the anger that has strained his relationships and tainted his everyday thoughts.

“There’s no pill, no therapy that will take these memories away,” says Mr. Comes, who grew up in a close-knit Catholic family in South Toledo.

The firefighter is among dozens of victims who have stepped forward this year in a crisis that continues to engulf the local diocese.

His motion to include his name on the suit is the latest action in a case that now includes eight other plaintiffs against the diocese and the once-popular priest, who left the ministry in 1987.

Diocesan lawyers are asking judges to dismiss the suits, arguing several issues, including separation of church and state and that the claims are being made too late. Victims lawyers are expected to respond today, claiming that time limitations don’t apply because the church covered up the crimes for generations.

For too long, Mr. Comes says, he was ashamed to talk of the memories that have tormented him since childhood.

He says he was emboldened to step forward partly because of the support of his wife, Wendy; relatives, and fellow firefighters.

On Dec. 11, he talked to about 60 co-workers at the Local 92 headquarters and told them a story that he said “you may not want to hear.” But he says they responded with applause and encouragement.

“When we go into a burning building, they need to know they can count on the guy beside them,” he says.

A 1987 graduate of Central Catholic High School, Mr. Comes claims he was repeatedly sexually abused and molested by the priest in the morning hours at the cleric’s private cottage in Michigan’s Irish Hills in the 1980s.

Mr. Gray, 54, has denied the charges, saying his accusers “are just out for money.” But diocese records say the former priest has previously admitted to child abuse and has undergone therapy.

The priest took a liking to Anthony Comes, who says he was “a troubled” freshman who needed a role model. But the bond between the priest and boy would degenerate into a pattern of sexual abuse that would last for two years and haunt the young man into adulthood, he says.

“No one could describe the magnitude of the effect it would have on me,” said Mr. Comes, brushing away tears during an interview this week. “I no longer trust anybody. I expect everybody to hurt me in the end.”

A middle child among seven siblings, he described himself as “age-appropriately insecure” and diminutive, often teased by other students.

Like other wayward teens at the school, “somehow or other, I got hooked up with Denny Gray.”

During the first six months of their relationship, “he was like a hero to me. He taught me to stand up for myself.”

he says after gaining his trust, the priest “began to molest me,”

But he says after gaining his trust, the priest “began to molest me,” starting one morning after the 15-year-old stayed at the rectory at St. Joseph’s of Maumee.

The cleric also drove the boy to a cottage at Crystal Lake, Mich., where the abuse continued until his junior year, Mr. Comes says.

“You would be rewarded with more invitations to the cottage,” says Mr. Comes. But by the time the youth was 17, he says he began to avoid the priest.

“I wasnâ€™t invited to the cottage anymore,” he says, losing the only social life he knew. “That killed me,” he says, but he knew what the priest was doing was wrong.

After high school, Mr. Comes joined the Navy. He says he wanted to leave the memories behind.

But as the priest sex-abuse crisis began making headlines nationally this year, he says he could not avoid the pain that he had buried deep inside.

His problems peaked shortly after the Memorial Day weekend, when he and his family moved into a new home in South Toledo. A few days later, as he was driving home, he was stunned to see a familiar face just five houses away.

“I saw Dennis Gray mowing the lawn,” he says.

He says he confronted the former priest and warned him to stay away from his children, ages 3 and 8.

Two days later, he, his wife, and his mother, Sandra Comes, 63, met with Bishop James Hoffman at his downtown office.

He told his story to the bishop in an emotional three-hour session. He says he asked Bishop Hoffman for honesty, and told him if he learned otherwise, “the gloves come off.”

“He apologized to me with more sincerity than I have ever heard in my life,” Mr. Comes says.

The firefighter says he and his mother asked Bishop Hoffman if anyone else had accused Mr. Gray of abuse and that the bishop responded that he was unaware of any previous incidents.

A few months later, Mr. Comes read a news article saying the bishop had been told of sex abuse accusations against Mr. Gray by another Central graduate, Matthew Simon, in 1995.

The diocese sent a letter about the accusations by Mr. Simon to Lucas County Children Services on Nov. 30, 1995 a copy forwarded to the bishop.

“I still can’t believe what the bishop said to me,” Mr. Comes says. “He hurt me as much as Denny Gray.”

Mr. Comes mother says she was surprised. “We were led to believe that this was the only [abuse]. I sat there and heard it. I don’t know how you could interpret it any other way.”

The bishop, who is undergoing treatment for cancer, could not be reached yesterday for comment. But a spokesman for the diocese said the bishop said in published remarks in October that he was aware of accusations against Dennis Gray in 1995.

The Rev. Michael Billian, diocesan chancellor, said in an interview in September that the diocese was instrumental in getting Mr. Gray to put up his home for sale shortly after Mr. Comes visit with the bishop.

“[The diocese] went to someone who knows Dennis Gray and asked him to [honor] the fireman’s request,” said the chancellor.

Mr. Gray, whose home is for sale, has not responded to recent requests for an interview. Mr. Comes lawyer, Catherine Hoolahan, says her client wants to reach out to help alleged victims.

“It’s part of his own healing. By putting a face and name on this action, he hopes to give support to other victims who don’t feel able to come forward yet.”