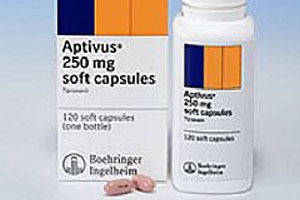 On July 5, 2006 the FDA issued a new black box warning to Aptivus. This new warning was prompted after the FDA received reports of brain bleeding from some patients who were prescribed Aptivus. Aptivus is a protease inhibitor, which is in the family of antiretroviral drugs. Aptivus obstructs HIV protease, an enzyme that HIV needs to make more copies of it. The drugs current black box warning states that patients taking Aptivus with another protease inhibitor, Norvir can develop potentially fatal bleeding in the brain (intracranial hemorrhage).

According to an FDA press release the above-mentioned conditions may have caused or been a factor to the patients’ brain bleeding. Investigations are ongoing to assess the role of Aptivus in intracranial hemorrhage.

Additional care must be used in patients who might be at risk for increased bleeding from trauma, surgery, or other medical conditions, or who are in receipt of medications known to increase the risk of bleeding, such as anti-platelet agents or anticoagulants.

Boehringer Ingelheim, the maker of Aptivus states that it has received 4 reports of brain bleeding, eight of them casued death out of 6,840 HIV patients taking Aptivus capsules as part of antiretroviral therapy in clinical trials. Boehringer Ingelheim sent a letter to physicians warning them of the reported cases. The letter sent to doctors is available of the FDA website. Boehringer Ingelheim stated that many of the Aptivus patients who experienced brain bleeding during clinical trials also had other medical conditions including: Lesions in the central nervous system; head trauma; recent brain surgery; problems with blood clotting; high blood pressure, and alcohol abuse.

Our Aptivus side effects lawyers are here to help you when you need it the most.