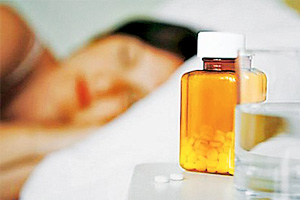 Sleeping Pills Linked To Lung Cancer. Our firm is investigating potential lawsuits on behalf of individuals who developed cancer after using benzodiazepines and z-drugs, which are commonly used to treat insomnia. Benzodiazepines are also frequently prescribed as an anti-anxiety medication. Z-drugs work similar to benzodiazepines and are newer. New research suggests that these medications, which include popular drugs such as Xanax and Valium, may increase the risk of respiratory cancers. If you or a loved one developed lung cancer after using sleeping pills, you may have valuable legal rights. Contact Parker Waichman LLP today for free, no-obligation legal consultation.

Study: Cancer Risk is Trebled with Use of Sleep Medications

In June 2015, The Daily Mail reported that a study found an increased risk of lung cancer among people who used sleep medications on a regular basis. The 20-year study included data from 30,000 people and was conducted by researchers from Norway, Finland, and the United Kingdom. Reportedly, the study was the largest of its kind to link sleep medications with an increased risk of tumors. In addition to the lungs, these cancerous growths were also found in the mouth, nose, and windpipe. While previous studies have detected an association, the association was too small to confidently determine if there was a link.

The researchers found a worrying rise in risks for respiratory cancers, The Daily Mail reports. “The association between the use of sleep medications and an increased mortality risk has been documented in more than 20 studies,” the scientists wrote. “Although most research has focused on all-cause mortality, a few studies have found that sleep medications are specifically associated with cancer deaths.”

This study was correlational and does not directly prove that sleeping aids cause cancer. The researchers concluded that “Further research is urgently needed to determine whether current sleep medications increase cancer risk,” according to The Daily Mail.