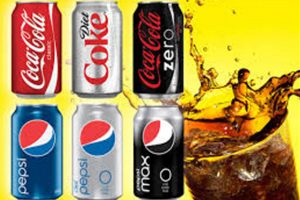 Deceit In Diet Cola Drinks. A Dunstable woman hasn’t been too pleased lately with her diet cola drinking experiences. Lauren Chenelle says she was duped by Coke and Pepsi into believing that she was drinking the same diet colas whether she bought a bottle from a store or a cup at the movie theater. That’s not the case.

So, on behalf of the thousands of Massachusetts diet cola drinkers, Chenelle is seeking a multimillion-dollar class-action lawsuit against the Coca-Cola Co. and PepsiCo. Her charge: that the companies made ”tens or hundreds of millions of dollars” that they wouldn’t have made otherwise, had they disclosed that bottled and canned diet colas are different from their fountain versions.

”Massachusetts consumers of fountain Diet Coke and Diet Pepsi were harmed by the misleading advertising of Coca-Cola and PepsiCo and the companies were unjustly enriched as a result,” said, Chenelle’s attorney, who wouldn’t comment further.

Chenelle, according to court documents, is concerned about possible health risks associated with saccharin, even though it is no longer listed as a carcinogen, and she attempts to avoid eating or drinking products containing the sweetener.

She doesn’t claim to have suffered any health injuries due to drinking the diet sodas.

She filed the lawsuit against Coca-Cola in Middlesex Superior Court earlier this month. Her suit against PepsiCo was filed on Jan. 20.

Similar cases have been filed in at least four other cities, including Chicago, Miami, San Diego, and Kansas City, Kan.

Coke offered her $500 to settle, according to court documents. But Chenelle is looking for something more in the vicinity of $10 million for the class.

”Saccharin is a safe sweetener, according to the [Food and Drug Administration],” said Ray Crockett, a spokesman for Coca-Cola. ”Since there is no basis for concern about saccharin, and because we’ve always disclosed the presence of saccharin in Diet Coke, the plaintiffs have not been harmed in any way.”

Coke uses a saccharin-aspartame blend in its fountain drinks because it creates a more stable sweetener, Crockett said.

Used alone, aspartame, which is heat-sensitive, loses its sweetness faster when the cola syrup is mixed from fountain dispensers found in movie theaters and restaurants.

Aspartame became the preferred low-calorie sweetener for soft drinks in 1981 when the National Institute of Environmental and Health Sciences first listed saccharin as a possible human carcinogen.

Congress later passed legislation that required all saccharin products to carry a label warning that the sweetener ”may be hazardous to you health.”

Five years ago, saccharin was dropped as a federally listed cancer-causing chemical when new studies showed that the previous findings, conducted on lab animals, didn’t apply to humans.

”If you’re a male rat, you might still be concerned,” said Bill Jameson, head of the report on carcinogens at the National Institute of Environmental and Health Sciences and the National Toxicology Program.

Jameson said the physiology of male rats makes them particularly susceptible to death by saccharin.

The high doses of saccharin given to the rats some scientists compared it to drinking more than 500 diet sodas a day and the highly concentrated and acidic urine of male rats combined to form piercing crystals that caused tumors in their bladders. He said that crystallization does not occur in humans.

”If you’re human, as long as you’re reasonable about [ingesting saccharin] and don’t overdo it, there shouldn’t be a problem,” Jameson said.

Chenelle claims Coke and Pepsi didn’t reveal that saccharin is an ingredient in fountain drinks because they knew sales would drop off due to the lingering concerns about the safety of the sweetener.

Saccharin is currently listed as an ingredient in fountain versions of Diet Coke and Diet Pepsi on the companies’ websites, but attorneys for Chenelle contend it was a recent addition. Coca-Cola officials, according to court documents, maintain they’ve disclosed on their website since 1999 the fact that fountain Diet Coke contains some saccharin.

”While we are sorry to hear that Ms. Chenelle has expressed dissatisfaction with her purchases of Coca-Cola’s product,” wrote Donald R. Frederico, an attorney for the company, in a letter to her attorney, ”we are convinced that her concerns are based on a mistaken understanding of the facts.”