Diflucan Increased Risk of Miscarriage and Birth Defects. Diflucan is a medication used to treat various fungal infections that is sold under the brand Diflucan and the generic fluconazole. Research results released by the U.S. FDA on April 26, 2016 have revealed that studies on Diflucan have found that there is a risk of adverse effects, specifically miscarriage, in women who take the drug during pregnancy.

If you have been treated with Diflucan during pregnancy and experienced a serious adverse health event, such as miscarriage, or if your baby was born with birth defects, the attorneys at Parker Waichman, LLP would like to hear from you.

Oral Diflucan, sold generically as fluconazole is used to treat yeast infections of the vaginal area, mouth, and esophagus and is also used in the treatment of a fungal infection of the brain and spinal cord known as cryptococcal meningitis. Cryptococcal meningitis typically affects individuals with weakened immune systems. Oral fluconazole is also used to prevent yeast infections that may spread to the rest of the body when prescribed to cancer patients who have a weakened immune system. 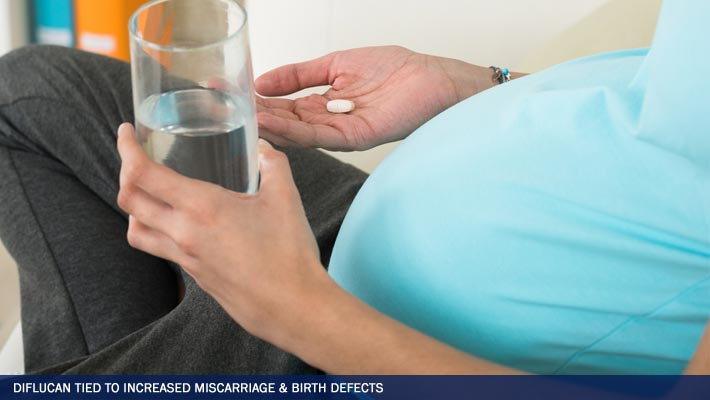 The FDA is reviewing the results of a Danish study that concluded that a possible increased risk of miscarriage may occur when oral fluconazole, which is also sold under the brand Diflucan, is taken. Oral Diflucan is prescribed for the treatment of yeast infections. The FDA also announced in April 2016 that it is reviewing additional information and will follow-up with its final conclusions and recommendations.

The Diflucan drug label, as of 2016, indicates that data available from studies in human beings do not suggest the existence of a greater risk of health problems during pregnancy or abnormalities in developing babies when expectant women are exposed to a single 150 mg dose of oral fluconazole to treat vaginal yeast infections. High doses of oral fluconazole-400-800 mg/day, when taken by pregnant women for “much longer” than one dose have led to reports of birth abnormalities. According to the FDA, however, the majority of the oral fluconazole use in the Danish research appeared to be one or two doses of 150 mg.

The Food and Drug Administration recommends that, until its review is complete and current research and other data is better understood, physicians should use caution when prescribing oral fluconazole to women who are pregnant. The FDA also warns that health care professionals should be aware that the U.S. Centers for Disease Control and Prevention guidelines recommend only using topical antifungal products to treat pregnant women who have been diagnosed with a vulvovaginal yeast infections. This includes treatment for longer periods than normal if the infections persist or recur. Pregnant patients, or patients who are trying to conceive, are advised to speak with their health care providers about alternate yeast infection treatments options.

In 2011, the FDA issued a warning that chronic, high-dose treatment with Diflucan may be tied to the development of some rare birth defects. In a 2011 Drug Safety Communication, the agency indicated that it was aware of five case reports in medical literature that describe rare and distinct birth defects in infants whose mothers were treated with chronic high-dose (400-800 mg/day) Diflucan for serious fungal infections during the first trimester of pregnancy.

In its 20111 Drug Safety Communication, the FDA also indicated that it was moving most uses of fluconazole to “Pregnancy Category D.” This drug category means that evidence exists of fetal risk based on human data; however, the potential benefits from use of the drug during pregnancy in women with serious or life-threatening conditions may be acceptable. The Pregnancy Category for the 150 mg dose of Diflucan used to treat most vaginal yeast infections remained at Category C.

The FDA also wrote that the cases reviewed in the medical literature included four in which expectant women who were treated with chronic high-dose intravenous Diflucan for coccidioidal meningitis. The fifth case involved an HIV-positive pregnant woman who received high-dose Diflucan for a vaginal yeast infection.

The birth defects that may result from chronic, high-dose Diflucan women who are pregnant include:

What’s more, the five cases reported in the medical literature all shared some characteristics with the autosomal recessive genetic disorder known as Antley-Bixler syndrome, according to the FDA. This particular combination of congenital anomalies occurs rarely in the general population, and is similar to anomalies that have been seen in animals following in utero Diflucan exposure.