Home » E-Cigarette Flavoring May be Linked to Popcorn Lung Disease Study: Chemical in E-Cig Flavoring is Associated with Popcorn Lung. E-cigarettes have grown in popularity in recent years. The devices are marketed as a healthier alternative to traditional cigarettes, and is sometimes touted as a cessation tool. Research is still being conducted on the long-term effects of using e-cigarettes, however. A study conducted by researchers at Harvard T.H. Chan School of Public Health found that e-cigarette flavoring often contains a chemical associated with popcorn lung disease, or bronchiolitis obliterans. The respiratory illness, which resembles chronic obstructive pulmonary disease, was identified in employees who worked at a microwave popcorn plant. The chemical implicated in popcorn lung was diacetyl.

The Harvard study, published December 2015 in the journal Environmental Health Perspectives, tested 51 different types of e-cigarettes. The devices were discharged and analyzed for diacetyl, along with two other “high-priority” flavoring chemicals: 2,3-pentanedione and acetoin. Researchers found that 39 out of 51 flavors contained diacetyl. Twenty-three products contained 2,3-Pentanedione and 46 contained acetoin. Overall, at least 47 products contained one of the flavoring chemicals. “Because of the associations between diacetyl and bronchiolitis obliterans and other severe respiratory diseases observed in workers, urgent action is recommended to further evaluate this potentially widespread exposure via flavored e-cigarettes.” the authors concluded.

The authors note that there are over 7,000 different e-cigarette flavors on the market. Safety concerns arose when diacetyl was linked to popcorn lung in the early 2000s.

The study was led by Joseph Allen, assistant professor of exposure assessment sciences. “Recognition of the hazards associated with inhaling flavoring chemicals started with ‘popcorn lung’ over a decade ago. However, diacetyl and other related flavoring chemicals are used in many other flavors beyond butter-flavored popcorn, including fruit flavors, alcohol flavors, and, we learned in our study, candy-flavored e-cigarettes,”

Study co-author David Christiani commented that the health risks of e-cigarettes remain unknown, noting that most of the research has focused on nicotine. “Since most of the health concerns about e-cigarettes have focused on nicotine, there is still much we do not know about e-cigarettes. In addition to containing varying levels of the addictive substance nicotine, they also contain other cancer-causing chemicals, such as formaldehyde, and as our study shows, flavoring chemicals that can cause lung damage,” said Christiani, Elkan Blout Professor of Environmental Genetics.

The agency announced new rules extending its authority to include e-cigarettes. 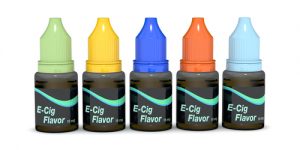 Parker Waichman LLP notes that, until recently, the U.S. Food and Drug Administration (FDA) had little authority over e-cigarettes. In May, the agency announced new rules extending its authority to include e-cigarettes and other tobacco products. Among other things, the FDA is banning the sale of e-cigarettes to anyone under the age of 18.

Unless e-cigarettes makers can prove “substantial equivalence”, the new rules mandate that devices undergo regulatory review. Manufacturers have two to three years to comply with the new regulations. “Today’s announcement is an important step in the fight for a tobacco-free generation – it will help us catch up with changes in the marketplace, put into place rules that protect our kids and give adults information they need to make informed decisions,” said Health and Human Services Secretary Sylvia Mathews Burwell in a statement.

Popcorn lung, the colloquial name for bronchiolitis obliterans, is when the tiny air sacs of the lungs (alveoli) become scarred. This irreversible and serious condition was identified in several microwave popcorn factory workers in Missouri in 2000; the U.S. Centers for Disease Control and Prevention (CDC) reported these cases in 2004. The National Institute of Occupational Safety and Health (NIOSH) found that the respiratory disease was likely caused by inhaling diacetyl, a flavoring agent used to add a buttery taste.

In September 2012, a Colorado man won a $7 million verdict in a popcorn lung lawsuit. The plaintiff developed the respiratory condition after eating two bags of microwave popcorn every day for 10 years.