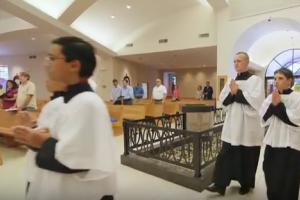 After formalizing a $10 million payout for 86 people abused by Geoghan dating to the 1960s, Judge Constance M. Sweeney gazed past a phalanx of lawyers and into the teary faces of the defrocked and jailed cleric’s victims, near the rear of her Suffolk County courtroom.

“You are to be admired for the fact that you stayed the course, you got to this point,” she told them. “I hope you are able to recognize in yourselves not just the hurt that was done to you but your own resilience, your courage.”

But after a long and heartfelt speech praising the Geoghan victims for forcing the church to open its eyes to child abusers in its ranks, Sweeney offered a nod to the very supervisors who oversaw Geoghan during his reign of abuse.

“The supervisory defendants acquitted themselves with dignity,” she said, “and with the intent to lessen the suffering of those individuals who have been assaulted.”

After the brief hearing, one Geoghan victim, Patrick McSorley of Boston, said the judge’s words to him and fellow victims on hand, among them Mark Keane of New Hampshire and Nancy Greenlaw of Boston, “were very comforting.”

But he said he saw nothing dignified in the way defendants such as Bernard Cardinal Law handled the case, which was derailed in May after the archdiocese reneged on a March agreement that would have netted victims twice as much.

“All Cardinal Law and the church have done is cover up, lie and mislead us,” he said. “But I’m going to try to move on, to bring closure to this chapter of my life.”

A fair and equitable settlement could be reached today

Law, who was in Rome for the funeral of a Vietnamese cardinal, approved a statement that read in part: “Cardinal Law is grateful a fair and equitable settlement could be reached today and the long and painful litigious process could be avoided for all of those involved.

“His Eminence continues to pray for the survivors of sexual abuse and he hopes that for those who have suffered the effects of such sinful and evil acts, today’s settlement will be a significant moment in their healing process.”

Church officials said the money – given to Garabedian in the form of a $10 million “official check” from Citizens Bank – came from third-party insurance companies and archdiocese insurance funds.

That payout is victory for the church, which has sought to limit its Geoghan payouts to set a precedent for future settlement costs, and to confine its liability to what it carries in insurance coverage.

Keane, whose abuse at Geoghan’s hands was some of the most grotesque laid out in the lawsuit, apologized after the session was completed “for setting a precedent for such a low settlement.”

“I can assure you not one of the victims is happy with this agreement,” he said. “The money comes from their insurance. The church’s $1 billion in property is safe and the Geoghan 86 are off the pads.”

Mitchell Garabedian, lawyer for the 86, said his clients agreed in the end to the deal because they are emotionally spent, adding: “My plaintiffs have demonstrated that money means far less to them than it clearly means to the supposedly moral and compassionate church.”

“This is my son,” she told Rogers, who listened politely as his co-counsel stood by. “He passed away last year. I want everybody to remember his face. I want everyone to know the church and its actions killed my Brian.”