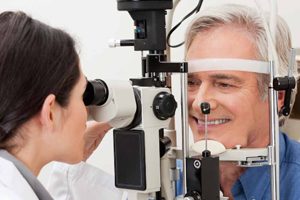 Men Should Have An Eye Tests Before Taking Viagra. Men should have their eyes checked before taking impotency drugs like Viagra, or risk going blind, a leading international ophthalmologist says.

Professor Neil Miller, of Johns Hopkins Hospital in Baltimore, said drugs such as Viagra, Cialis and Levitra had the potential to lower blood pressure, putting some patients at risk of having a stroke in the optic nerve.

He was talking outside an ophthalmology conference on the Gold Coast which was told of two Australian cases of men in their 60s who had suffered vision impairment after taking Viagra.

“Almost nobody goes completely blind, but they can have significant visual loss in one eye,” Prof Miller said.

Although there’s been less than 20 cases of vision loss reported among people taking the drugs out of many millions of prescriptions worldwide, he said the extent of the problem was difficult to assess.

“We haven’t asked the patients the right questions and not every ophthalmologist who sees a case winds up reporting it,” Prof Miller said.

Another complication is that patients who suffer vision loss of this type a condition known as non-arteritic anterior ischemic optic neuropathy (NAION) are of an age where they could be at risk anyway from the effects of hardening of the arteries, hypertension, diabetes or other conditions.

For example, ophthalmologist Peter Cranstoun said the two Australian cases reported by a visiting medical officer at Brisbane’s Princess Alexandra Hospital had other health issues which may have impacted on their eye problems.

Prof Miller recommended patients considering going on an impotency drug should have an eye examination to assess their risk of an optic nerve stroke.

He said people who developed NAION usually had a smaller than normal optic nerve head, also called the optic disc.

Optic nerve heads normally look like a circle with a depression in the centre, known as the optic cup.

In most people, the cup takes up about 30 to 50 per cent of the diameter of the optic nerve head.

Prof Miller said those at risk of NAION also had a much smaller optic cup.

“The implication is that all the nerve fibres are crowded into a much smaller space,” he explained.

“Put those 100 people into a room that’s half that size and they’re all crowded together. They can’t breathe, they can’t walk around.

“Then something happens that reduces the oxygen and that’s what tips them over the brink.”

“But they also dilate general blood vessels and when that happens, blood pressure can fall.”

“If there’s a question about the optic disc – what we call a disc at risk – then they could ask an ophthalmologist for an opinion,” he said.

Queensland branch members of the Royal Australian and New Zealand College of Ophthalmologists are on the Gold Coast for their annual scientific meeting.

The US Food and Drug Administration recently ordered that labels for impotency drugs contain a warning about vision loss.

A spokesman for Pfizer Australia, which markets Viagra, said the labels on the drugs sold in Australia had been amended to reflect the “extremely rare” possibility of developing NAION.

He said the amendments followed consultation with the Therapeutic Goods Administration (TGA).