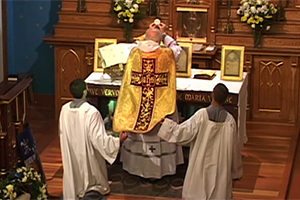 “We are better prepared to deal with it here,” he said. “I think it would be the best thing to do.”

The request comes a day after the archdiocese announced eight priests were no longer serving the church because of allegations of sexual misconduct. Five are appealing their removal.

The suburban priests named Sunday include: the Rev. James Ray, who served at St. Peter Damian in Bartlett from 1984 to 1989 and at Transfiguration Church in Wauconda from 1989 to 1991; the Rev. William Lupo, who served at Bartlett’s St.Peter Damian from 1990 until last month, at St. Mary Church in Des Plaines from 1979 to 1986, and at Our Lady of the Wayside Church in Arlington Heights from 1986 to 1990; and the Rev. Daniel Buck, who had been associate pastor at St. Mary’s Church in Buffalo Grove for about one year.

The Rev. Dan Smilanic, adjutant judicial vicar for the Chicago Archdiocese, Monday echoed the cardinal’s statements. Smilanic said sexual molestation of a minor is considered among the “crimes of the most heinous nature,” equivalent to violating secrecy of confession or desecrating the Eucharist.

Church policy calls for a Vatican tribunal to review the cases of priests appealing their removal, but George said there is a chance the Vatican will allow the Chicago Archdiocese to hear the appeals instead.

Smilanic said the cardinal today will decree that the preliminary investigation is already done because the priests were previously evaluated and the allegations heard before a board. By doing this, the cardinal set the judicial process in motion.

“These crimes are so serious that we must seek the direction from the Vatican to find out what to do about it,” Smilanic said.

Despite the increasing number of priests and parishes touched by the scandal, the faith of some Catholics in the Northwest suburbs appears to remain strong.

“I really believe that it will make us even a little bit stronger,” said Donna Fanning, a volunteer at St. Mary church in Buffalo Grove, one of those rocked by Sunday’s announcements. “My faith has not shaken.”

The priests named Sunday include Ray, who is accused of sexual abuse of a male youth from St. Peter Damian in Bartlett.

Another of the eight priests, Lupo, who served at St.Ã¦ Peter Damian, resigned the priesthood last month when faced with the allegations. The allegations stem from his time as associate pastor at St. Mary Church in Des Plaines.

The double dose of bad news in Bartlett prompted the Rev. Jerome Listecki, an auxiliary bishop, to express to some Bartlett parishioners Sunday his sympathy for pain caused by having successive priests linked to misconduct.

The weekend announcement brings to at least 12 the number of priests removed from duties in the archdiocese this year.

The allegations against Ray surfaced in 1991. A man told the archdiocese that when he was a minor, Ray sexually abused him while Ray was a priest at St. Peter Damian, McDonough said.

After 1993, the archdiocese Fitness Review Board recommended that Ray be allowed to serve in an administrative position. Shortly thereafter, he took a job as assistant liaison in the Chicago Archdiocese Office of Health and Hospital Affairs. Ray was monitored and forbidden from contact with minors, McDonough said.

Ray was removed from all duties this week. He is appealing the removal, she said.

When the sexual misconduct allegations against Lupo surfaced

Lupo appeared before the Fitness Review Board in the early 1990s. The panel recommended Lupo stay in ministry, but his actions should be monitored by the church and he not be allowed to be alone with minors, McDonough said.

Ray and Lupo both now are staying in private residences paid for by the archdiocese and the church will continue their care, McDonough said.

At Our Lady of the Wayside Church in Arlington Heights, where Lupo served from 1986-1990, parishioners said Lupo was well-liked and was popular for his sermons. He was not involved with youth ministry and never came into the school.

“My kids were young when Bill Lupo was here; there was never indication of any of that while he was here,” said longtime parishioner John Bauer. “It’s more surprise than anything. It just brings the tragedy of the whole situation closer to home. It personalizes the situation.”

The archdiocese said Buck’s alleged misconduct, against a teenaged minor girl, occurred while he served at St. Francis Borgia Parish in Chicago from 1979 through 1984.

Sometime after 1993, the allegation was reviewed by the Fitness Review Board, which recommended Buck remain in the parish ministry as long as he was not permitted to be with minors without another adult present.

Listecki said in a letter to parishioners Sunday that, “The Board found that Fr. Buck was no danger to minors and his actions were monitored.” However, he said the new Charter for the Protection of Children and Young People passed by the U.S. Conference of Catholic Bishops last month calls for any priest who has had even a single act of sexual misconduct with a minor to be removed from the ministry.

The Rev. Marc Reszel, current St. Mary pastor, said Buck had been director of liturgical services at St.Mary, where he had such tasks as scheduling Masses and training and assigning lay ministers.

Under the new policy, however, Buck was relieved of his duties.

Buck is appealing his removal, which will be handled through church courts.

“People are showing up and coming to church. The Gospel continues to be proclaimed,” Reszel said.

Reszel said that at Monday’s 6:30a.m. Mass, members prayed for the parish, Buck and victims of sexual misconduct.

“It’s a difficult time,” Reszel said. “Yes, this institution has been embarrassed and hurt. But as a believer and a priest, I still need to do what I was ordained to do.”

In Palatine, some parishioners who knew Buck from his service there from 1984 to 1989 also spoke highly of him.

“He was a very nice guy,” said Mary Obey, a member at St. Thomas of Villanova. “It’s a very busy parish. He had a lot of responsibilities. He always did what he was supposed to do, as far as I know. It comes as a complete shock to me. As far as I’m concerned, he was just a nice guy.”

The community at St. Thomas is still trying to cope with charges of sexual misconduct that were recently brought against another priest who helped with weekend Mass services at the church for nine years. Marion Snieg, 74, was accused in early June of having sexual contact with underage boys in the late 1950s.

Learning of the allegations against both Snieg and Buck during the same month has been disheartening for many church members, said Jean Ksiazek, the vice chairwoman of the parish pastoral council at St. Thomas and a longtime member of the church.

“It’s very difficult for a lot of us,” said. “We’re very saddened as a family for what’s going on.”

“Father Buck was very well respected and well liked at the time,” Ksiazek said. “There was not anything that would have ever given me cause for suspicion.

“There’s a lot of investigation that needs to be done,” she added.