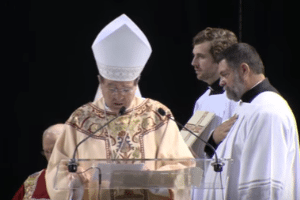 Molested Boys Filed A Lawsuit Against Ex-Priest. Four men filed suit Monday against the Catholic Diocese of St. Petersburg and Robert Schaeufele, the defrocked priest sentenced this year to 30 years in prison after pleading guilty to molesting boys in his charge.

The number of lawsuits filed against Schaeufele, 55, now is six.

Schaeufele has been convicted of molesting two of the four plaintiffs who sued Monday in Pinellas County Circuit Court, said Jeff Anderson, a St. Paul, Minn.-based attorney in the case.

Both say in their lawsuits that they were given enemas by Schaeufele when they were parishioners at Sacred Heart Catholic Church in Pinellas Park. One of the other two plaintiffs was also at Sacred Heart when Schaeufele was a priest there; the other was at the Cathedral of St. Jude in St. Petersburg, where he said Schaeufele sodomized him with a hairbrush and candles, his lawsuit says.

One of the four plaintiffs is Christopher M. McCafferty, now 31, and the only one who is using his name in court documents. The other three plaintiffs are identified as John Doe I, John Doe III and John Doe IV. Anderson said McCafferty was to have been John Doe II until he said he wanted his name used.

“I was 11 years old,” a visibly nervous McCafferty said as he read a prepared statement Monday during a news conference outside the diocese’s pastoral center on Ninth Avenue North. He was flanked by Anderson and other supporters, including Barbara Blaine, founder of a national support group, the Survivors Network of those Abused by Priests.

McCafferty said that at the time the abuse happened, he thought that because it was a priest who was molesting him, it must have been right. “As I got older” he said, “I knew it was the wrong thing.”

All spoke of the lawsuits as an effort to encourage other victims to step forward and to enlist Bishop Robert N. Lynch, who is named as a defendant, to release files on any priests in the diocese who have been accused of child molestation.

In a prepared statement, the diocese said it was Lynch who removed Schaeufele once the bishop received a complaint about him, and that before April 2002, there were no allegations of sexual misconduct in Schaeufele’s personnel file.

The statement also said the diocese has offered pastoral care and assistance to Schaeufele’s victims and their families, and that all four plaintiffs are receiving counseling paid for by the diocese.