Legionnaires’ Disease Injury Lawsuits. Our firm is investigating potential lawsuits on behalf of individuals who developed Legionnaire’s disease as part of the outbreak in New York City during the summer of 2015. The deadly outbreak of the disease is the largest the city has ever experienced, and more than 100 people have been sickened since July 10, 2015. Officials say the outbreak stems from building cooling towers contaminated with the Legionella bacteria, raising concerns about building regulations and oversight. If you or someone you know developed Legionnaire’s disease, contact Parker Waichman LLP today.

The South Bronx outbreak sickened 113 people and left 12 dead, as of August 10, 2015. According to a Lohud report dated August 11, 2015, 18 buildings have tested positive for the bacteria. There are a total of 161 buildings with cooling towers in the South Bronx area, and 39 were tested in light of the outbreak. “We’ve never seen such a concentrated outbreak in the history of New York City,” said Mayor Bill de Blasio at a press conference. There have also been cases in Rockland County, where officials reported 3 cases as of July 1, 2015. 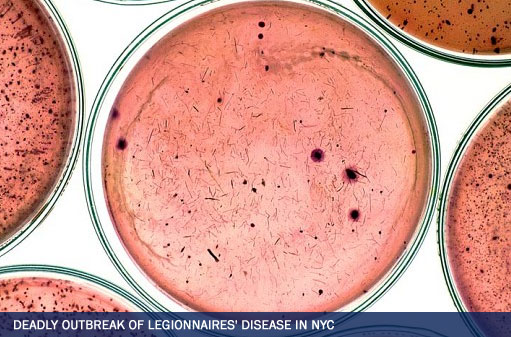 The 2015 New York outbreak has raised public concerns about building regulations. According to Lohud, Governor Andrew Cuomo is calling for a standard statewide policy to inspect buildings for the bacteria. “We can’t have this happen again,” Cuomo told reporters. “We have to have a statewide system, statewide protocols. So if you own a building in Buffalo, Rochester, Syracuse, or Nassau, you have the same protocol.” Currently, there is little oversight of cooling systems in apartments, nursing homes, and hospitals. “If building owners are not going to take it on themselves to do the right thing and take corrective action, then the state will,” said Cuomo.

What is Legionnaire’s Disease?

Legionnaire’s disease is a form of pneumonia caused by exposure to the Legionella bacteria, which tends to grow in warm water. It is contracted by breathing in water vapor contaminated with the bacteria. The disease is not contagious by person to person contact. According to the Centers for Disease Control and Prevention, the symptoms of Legionnaire’s disease include:

Typically, symptoms manifest 2 to 10 days after exposure to the bacteria. Older adults are most vulnerable to Legionnaire’s disease, especially if they smoke, have lung disease, or have a compromised immune system.