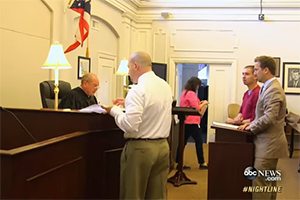 Madoff pleaded guilty to 11 fraud counts earlier this month.. ‘Madoff’ – once a chairman of the Nasdaq stock exchange – is the founder and primary owner of Bernard L. Madoff Investment Securities LLC. The firm is primarily known for its business in market-making, or serving as the middleman between buyers and sellers of shares. However, ‘Madoff’ also oversaw an investment-advisory business that managed money for high-net-worth individuals, hedge funds and other institutions.

According to the FBI complaint against ‘Madoff’, that business was largely a Ponzi scheme. The FBI said ‘Madoff’ “deceived investors by operating a securities business in which he traded and lost investor money, and then paid certain investors purported returns on investment with the principal received from other, different investors, which resulted in losses of approximately billions of dollars.” Some estimates say those losses could reach as much as $50 billion. Estimates of Madoff’s fraud have put the amount lost by investors at more than $64 billion.

The ‘Madoff’ trustees’ bid to gain power of attorney over the London unit had met with resistance from U.S. prosecutors. According to Bloomberg.com, they claimed such a move might hinder their investigation at some future point. Nevertheless, U.S. District Judge Louis Stanton, who is overseeing the Securities and Exchange Commission‘s civil suit against ‘Madoff’, awarded the trustee legal authority over Madoff Securities International yesterday.

According to Bloomberg, Madoff International was owned almost exclusively by ‘Madoff’ himself and served as his proprietary trading unit. In his ruling, Judge Stanton said it would be “provident and expedient” for the trustee to have power of attorney over the unit. The decision effectively gives the trustee voting rights and other controls over Madoff Securities International Ltd.