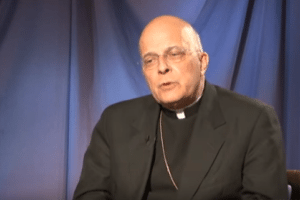 The jury of seven men and five women took 10 minutes to recommend the maximum sentence of 10 years on the two counts on which it convicted Clark. If convicted of sodomy he could have faced 20 years to life in prison.

Judge Thomas Waller set sentencing for Aug. 13 and sent Clark, 55, back to jail in Bullitt County, where he has been held since his arrest last August.

Clark was convicted in 1988 of sexual abuse and sodomy for molesting two other boys when he was assistant pastor of St. Rita Catholic Church. He was the first Roman Catholic priest to be brought to trial on criminal charges since the current priest-abuse crisis began in the Roman Catholic A rchdiocese of Louisville in April 2002.

Victim advocates and people who alleged he abused them in suits they filed against the church offered mixed reactions to the verdict and sentence, which will make Clark eligible for parole in about a year, after credit for the year he will have spent in the Bullitt County Detention Center by the time he is sentenced.

“Some justice is better than none,” said Sue Archibald, president of Linkup, a national support and advocacy group for victims of clergy abuse, who monitored the three-day trial. “The most disturbing aspect is that Dan Clark will be back on the street.”

Paul Barrett, 38, one of 19 plaintiffs who alleged in civil suits against the archdiocese that Clark had abused them, said: “Bullitt County has sent a strong message that we don’t need these men in our community.” In a prepared statement, the archdiocese said: “No child should ever be abused. We hope that this verdict brings a just resolution for all of those involved in this tragic situation.”

Cecelia Price, spokeswoman for the archdiocese, said that under rules issued last year by the U.S. Conference of Catholic Bishops, Clark’s case will be turned over to the Vatican “for investigation and possible removal” from the priesthood.

In a statement issued earlier this year, Brian Reynolds, the archdiocese’s chancellor and chief administrative of ficer, said: “In hindsight, it is easy to say the church should have seen more or acted sooner.”

he pleaded guilty to molesting children in 1988

The fact that Clark re-offended after he pleaded guilty to molesting children in 1988 showed he should have been removed from the priesthood after that conviction, said Bullitt Commonwealth’s Attorney Mike Mann in responding to reporter’s questions yesterday. Kelly removed Clark from public ministry in 1988, meaning he was no longer assigned to work in parishes. Kelly then removed Clark from all ministry last summer, although he remains a priest.

Clark was whisked out of the court room yesterday before he could be questioned by reporters, and his lawyer, David Lambertus, and a sister, Jennifer Mikesell, declined to comment.

Mann, who prosecuted the case, said he feared that the jury had deadlocked and was pleased it returned convictions on the two counts. He said the acquittal on the sodomy charge was puzzling, in part because he said he thought the younger victim had been the stronger witness. “It would seem that if they found him believable that the sex abuse had occurred, they would believe him when he said he was sodomized,” Mann said.

However, he noted that the boy claimed the sodomy had happened only once. “It might have been a compromise verdict,” he said.

The jury forewoman, Leigh Anne Florence, declined to comment on the deliberations, other than to say, “We just went on the evidence we had.”

Mann said he elected not to present as witnesses any of the other plaintiffs who accused Clark in civil suits for fear that Lambertus would have attacked them as money-seekers, which was the motive Lambertus ascribed to the family of the two boys.

Mann also said he proved Clark’s history and pattern of abuse through the testimony of Michael Mudd, one of the two boys whom Clark admitted molesting when he pleaded guilty in 1988. Mudd’s credibility “could not be attacked,” Mann said.

In addition to Mudd, Mann presented three other witnesses the two boys and their mother.

The boys described how Clark who’d been a family friend all their lives gave them gifts, took them skating and drove them to football practice, but eventually began putting his hands down their pants and fondling them. The youngest boy said Clark performed oral sodomy on him in a vehicle in a parking lot.

Clark, the lone witness for the defense, denied the allegations, and Lambertus told the jury that the case was “all about money.”

The boys ‘ mother sued the archdiocese on their behalf, as did two relatives, Ralph and John Henry, and they will share in the $25.7 million settlement struck earlier this month between the archdiocese and 243 plaintiffs. The mother’s suit, and Ralph Henry’s, also named Clark personally as a defendant, and that portion of their complaints is still pending.

Mann told the jury that there was only “one reasonabl e explanation” why Clark bought the family groceries and made payments on their mobile home “to get the boys alone so he could fondle them.” Mann also forced Clark to admit on cross-examination that he violated the terms of his 1988 probation and mandatory sex-offender treatment, which required him to avoid unsupervised contact with children.

In the penalty phase of the trial, Lambertus seemed to realize that it was a foregone conclusion the jury was going to recommend the maximum sentence. “I’m not going to beg or try to get into your conscience,” said Lambertus.

Mann asked for the maximum five years on both counts of sexual abuse, to run consecutively.

After the trial, Doug Lynch, 34, another plaintiff in a civil suit who alleged Clark abused him at St. Rita, praised the prosecuting witnesses and their family.

“They can leave here knowing they did everything they could to bring Clark to justice,” Lynch said. “Those two boys were very, very brave. I look at them as heroes.”

Clark is one of three Catholic priests and two former parochial school teachers who have been charged with crimes since April 2002, when the wave of lawsuits began against the church. The Rev. Louis E. Miller, who is serving a 20-year sentence after pleading guilty to molesting 21 children in Jefferson County, could get more prison time when he is sentenced Aug. 18 for abusing 14 children in Oldham County, where he also pleaded guilty before trial.

Charges are pending in Jefferson Circuit Court against the Rev. James Hargadon and former teachers Gary Kazmarek and Joseph B. Greene III. Greene is to be tried Sept. 9, Hargadon Oct. 24 and Kazmarek Dec. 9.