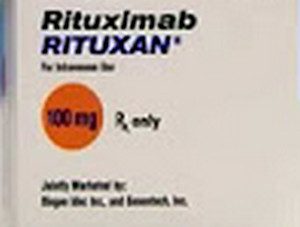 Rituxan May Cause Brain Disease. On December 19, 2006 Genentech issued a warning to healthcare providers for their oncology drug Rituxan, advising them that the drug has been linked to the deaths of two lupus patients from a rare brain disease, called Progressive multifocal leukoencephalopathy (PML). On November 10, 2006, Health Canada and the manufacturer of Rituxan (Generic: rituximab) issued a new safety warning for the drug. Reports of Bowel obstruction and gastrointestinal perforation lead to the new safety warning for Rituxan (Generic: rituximab). Rituxan is prescribed to treat B-cell non-Hodgkin’s Lymphoma (NHL) and Rheumatoid Arthritis (RA). Rituxan first gained FDA approval in 1997. ‘Rituxan’ is manufactured by Genentech, Inc.

A causal relationship connecting Rituxan and these events has not been established. In post-marketing reports of patients with Non-Hodgkin’s Lymphoma (NHL), the mean time to onset of symptoms was 6 days from the start of therapy (range 1 day to 77 days) for documented gastrointestinal perforation. Complaints of abdominal pain, particularly early in the course of treatment, should prompt a thorough diagnostic assessment and appropriate treatment.

Discoverings from the pharmacovigilance database for Rituxan point outs that 47 cases of bowel obstruction (9 deaths), and 37 cases of gastrointestinal perforation (4 deaths), have been reported in ‘Rituxan’ patients, based on an approximately 730,000 cumulative patient exposure. The reports originate from both spontaneous sources and clinical studies and the majority of these cases were reported for the Non-Hodgkin’s Lymphoma (NHL) indication. Analysis of the data from the majority of the 47 cases of bowel obstruction was difficult due to multiple risk factors, including gastrointestinal lymphoma, various other gastrointestinal disorders, and concomitant treatments, such as chemotherapy, steroids, and radiation therapy.