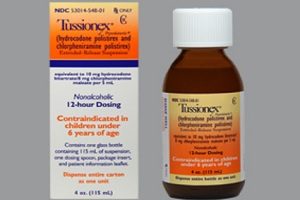 Tussionex Death Reports. Tussionex, a prescription cough medicine manufactured by UCB SA, has been linked to numerous side effects and some deaths, and the Food and Drug Administration (FDA) is said to be considering issuing a public warning for Tussionex.

UCB SA, a Belgian company, recently contacted the FDA about updating safety information on the Tussionex label regarding proper dosage.

Tussionex, sold as ‘Tussionex’ Pennkinetic Extended-Release Suspension, is one of eight prescription cough medicines that contain the narcotic pain reliever hydrocodone. Hydrocodone is habit-forming, and can lead to physical and psychological addiction. A hydrocodone overdose is possible when too much of the drug is used. An overdose of hydrocodone can be fatal.

Five deaths have been reported among children under 6 who took Tussionex since its approval in 1987.   ‘Tussionex’ has only been approved for adults and children over 6. The ‘Tussionex’ label says specifically that the drug is not intended for use in children under 6, but the reports of pediatric deaths suggest that those warnings are inadequate.

On Friday, The Wall Street Journal reported that the FDA was considering additional warnings for Tussionex. When those warnings might be coming is unknown, but the Journal article said the FDA decided on the course of action after receiving numerous reports of adverse events including some deaths related to ‘Tussionex’. The Journal said the FDA had received reports of patients taking higher doses or more frequent doses than recommended.

A spokesman for UCB SA told Reuters that Tussionex is “safe and effective” when directed. However, reports of deaths and other reactions tied to ‘Tussionex’ had prompted the company to approach the FDA about adding additional safety warnings to the drug.

Tussionex is not the only cough medicine that has raised concerns because of dangers posed to children.  In January, the FDA issued a warning that such medicines should not be given to children under two. The FDA is still reviewing these medications for use in older children, and could provide further guidance in the coming months.

In fact, in a preemptive move, the manufacturers of some infant over-the-counter cold medicines chose to recall the products this past October. Among the over-the-counter medications coming off the market are Johnson & Johnson’s Tylenol Plus Cold, Novartis AG’s Triaminic Infant & Toddler Thin Strips Decongestant, and one product sold by Wyeth under its Robitussin brand.

Pediacare, Dimetapp and Little Colds brand products were also recalled.   In the January public health advisory, the FDA praised the manufacturers of these products for the move to take them off the market.