Uber Does Not Screen Its Drivers. On February 23, 2016, a Minnesota woman filed a lawsuit against ride service Uber, alleging that the company does not adequately screen its drivers. The lawsuit says that after an Uber ride the driver sexually assaulted her and held her against her will.

The complaint was filed in the U.S. District Court for the Northern District of California.

The lawsuit says that on August 5, 2016, the plaintiff, identified in the lawsuit as Jane Doe, and some friends used the ‘Uber’ smartphone app to book a ride. The driver, Abdel Jacquez, gave the group his direct number to get in touch with him for a second ride later in the evening. The lawsuit alleges that the driver propositioned Jane Doe during the second ride. When she refused, he allegedly grabbed her aggressively and sexually assaulted her.

Parker Waichman notes that Uber promotes the ease and convenience of booking and paying for a ride through a smartphone, but critics say the company does not pay enough attention to the backgrounds and qualifications of driver.

The lawsuit alleges Uber Technologies is negligent in its driver hiring and screening practices. According to the suit, a proper background check would have revealed that Jaquez had a prior arrest for a sexual crime. The usual screening standard in the taxi industry is to do thorough background check based on fingerprints. Jane Doe’s lawsuit contends that if ‘Uber’ had done a thorough check, the assault could have been avoided.

The suit charges that as a transportation company and common carrier, Uber is “directly liable for its negligent hiring, supervision, and retention of Jaquez, directly liable for its advertising misrepresentations holding out its transportation service as a safer alternative to taxis for women.” The suit also alleges that ‘Uber’ “placed profits over safety by deliberately lowering the bar for drivers in order to rapidly expand its network of drivers and thus its profits.” 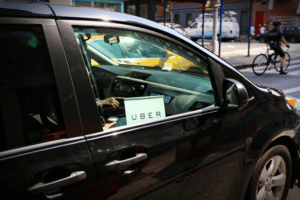 Ride services like ‘Uber’ and Lyft have been found guilty of negligence in screening their drivers. Drivers have been charged with a variety of crimes, including murder, manslaughter, and rape.

The ride services have attempted to argue that the liability fell on the drivers alone, because they are contractors and not employees. Courts, however, have increasingly found the rideshare companies liable for not conducting proper background checks.

The California Public Utilities Commission recently ruled that Uber and Lyft owe a duty to passengers. More stringent regulations lay out responsibilities for drivers for rideshare services that are more like those of traditional taxi drivers. The responsibilities include regular vehicle inspections, more stringent and detailed background checks, mandated proof of liability insurance, and heightened transparency about past driver suspensions and deactivations.

Bloomberg reports that last year Uber settled a lawsuit filed by two women who sought to hold the company responsible for alleged sexual assaults by drivers. Jane Doe 1 alleged that her Uber driver in Boston in February 2015 assaulted her after he had dropped off her friend. Jane Doe 2 said that when she hailed a ride in Charleston, South Carolina, in August 2015, the driver detoured from the route to her home so he could “viciously rape her.”

The lawsuit echoed criticisms leveled by other passengers and government officials that Uber has misled customers about how thoroughly it screens the drivers it hires. The company, however, resists using fingerprint-based background checks, like those used for most U.S. taxi drivers. Instead, ‘Uber’ checks people’s names against court records.

In 2016, Uber settled a lawsuit alleging that its background checks on drivers were not as thorough as advertised. As part of the settlement, ‘Uber’ agreed to stop describing its background checks as “the gold standard” and stop using the slogan the “safest ride on the road,” according to the district attorneys of San Francisco and Los Angeles.

USA Today College published safety tips for college students using ‘Uber’. To avoid getting into a car with an impostor, safety officials advise students to verify that the driver’s identity and car information match what has been sent to their phone. Any student using a ride service should let a roommate, friend or family member know the plans, including estimated arrival time, so someone will follow up if the student does not arrive as expected.

If you or someone you know has been sexually assaulted or otherwise hurt by an Uber driver, the attorneys at Parker Waichman LLP can offer a free, no obligation case evaluation. To reach the firm, fill out the contact form or call 1-800-YOURLAWYER (1-800-968-7529).