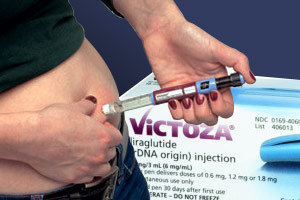 Victoza Side Effect Injury Lawsuits. Our firm is investigating potential lawsuits on behalf of patients who suffered from pancreatitis, pancreatic cancer, kidney failure or thyroid cancer related to the use of Victoza (liraglutide), a Type 2 diabetes medication. Denmark-based manufacturer Novo Nordisk gained approval for the drug in 2010. The medication, taken as a daily injection, is a glucagon-like peptide-1 (GLP-1) therapy. GLP-1 is hormone that stimulates the production of insulin, which is needed to help break down sugar in the body. GLP-1 therapies such as Victoza, Byetta and Januvia work by imitating the activity of this hormone. However, research suggests that use of Victoza may increase the risk of serious complications such as pancreatitis, pancreatic cancer, thyroid cancer and kidney failure.

According to Public Citizen, a patient safety group, Victoza was approved against the advice of three reviewers from the U.S. Food and Drug Administration (FDA). Dr. Sidney Wolfe, director of Public Citizen’s Health Research Group and consumer representative on the FDA’s advisory panel for drug safety and risk management, feels that the drug should be banned stating that “The (approval) was a huge blow to the health and safety of diabetics in this country,” Reuters reported. If you or a loved one took Victoza and suffered from pancreatitis, pancreatic cancer, thyroid cancer or kidney failure, our attorneys would like to speak with you. Call Parker Waichman LLP today for a free, no-obligation evaluation of your case.

Research suggests that Victoza can increase the risk of pancreatitis, or inflammation of the pancreas. Pancreatitis is also a risk factor for pancreatic cancer. According to the FDA, clinical trials suggested that Victoza may be linked to pancreatitis. The agency also said that drugs that work through similar mechanisms have also been associated with this risk. In 2011, researchers at the University of California, Los Angeles published a study in the Gastroenterology journal showing that the risk of pancreatitis was six times higher in patients taking GLP-1 therapies. The researchers, including lead author Robert Elashoff and Peter Butler, stated that medications in the GLP-1 drug class “could have serious unintended and unpredicted side effects.”

There has been a growing concern over Victoza and pancreatic cancer, a condition that is often fatal due to the fact that it is not detected until the advanced stages. The 2011 Gastroenterology study had found that the GLP-1 therapy Byetta was associated with a 2.9-fold increased risk of pancreatic cancer. Peter Butler, one of the authors of the study, has advocated for more research analyzing the link between GLP-1 therapies, pancreatic cancer other cancers. “The data we have so far makes the question sufficiently robust that it has to be answered,” Butler stated. “Hopefully this debate will raise the awareness of the scientific community, so that people will be motivated to join in the research.” Edwin Gale, an endocrinologist at the University of Bristol, UK, echoed Butler’s need for more research, pointing out that “Pancreatitis may be just the tip of the iceberg, and it’s the iceberg that concerns me.”

Robert Elashoff and his team also found that GLP-1 therapies such as Byetta may be associated with an increased risk of thyroid cancer. The similarity between Byetta and Victoza has led some researchers, including Peter Butler, to feel that more research is needed to explore the risk of thyroid cancer associated with the use of medications such as Victoza. According to Reuters, high doses of Victoza caused thyroid tumors in rats and mice and the FDA said it was uncertain whether or not the medication would cause thyroid cancer in humans. In approving the drug, the FDA asked Novo Nordisk to conduct a five-year study evaluating whether Victoza caused pancreatitis, thyroid cancer and other medical conditions.

Normally, kidneys help filter toxins and excess substances such as fluids, salts and waste from the blood. When kidney failure occurs, the blood is no longer filtered and dangerously high levels of toxins can build up quickly in the body. Following the approval of Victoza, the FDA received a number of reports linking the drug to renal failure. In addressing these reports, the safety label was updated to warn that “Victoza® may cause nausea, vomiting, or diarrhea leading to dehydration, which may cause kidney failure. This can happen in people who have never had kidney problems before.” Meanwhile, Public Citizen’s Dr. Wolfe has deemed the drug labeling system as “reckless” because it has not encouraged doctors or patients to stop taking the medication. “Clearly, the FDA’s warning system is not sufficient,” Wolfe stated. “The drug should be taken off the market.”

Legal Help for Victims of Victoza Side Effects

If you or a loved one took Victoza and suffered from pancreatitis, pancreatic cancer, kidney failure, thyroid cancer or other potential complications associated with this medication, you may have valuable legal rights. Please fill out our online for or call 1-800-YOURLAWYER (1-800-968-7529) to speak with one of our experienced drug injury lawyers today.