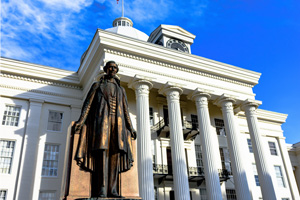 The Supreme Court issued a decision in 1896 in the case of Plessy v. Ferguson that stated that Louisiana’s “separate but equal” law was constitutional. The case began when Homer Plessy, an African-American man, sat in a train car for whites. The court rejected Plessy’s argument that Louisiana’s law violated his constitutional rights. After the court issued their decision, restrictive Jim Crow laws and segregated public spaces quickly became commonplace.

Reconstruction ended when federal troops withdrew from the South after the Compromise of 1877. African-Americans in the South had seen the promise of equality with the ratification of the 13th, 14th, and 15th amendments, but after the withdrawal of the troops and return of Southern state and local governments to local control, those rights were quickly eroded and white supremacy grew. Black and white Southerners mixed somewhat freely until the 1880s, when lawmakers passed legislation requiring separate railway cars for “Negro” passengers.

Southern blacks were horrified to see their newfound rights being restricted, and those in New Orleans decided to challenge the railway car laws. They recruited Homer Plessy, a mixed-race man who did not look black: He was seven-eighths white. Plessy bought a ticket from New Orleans to Covington, Louisiana, on June 7, 1892, and when he boarded the train, he sat in a whites-only railway car. The conductor asked him to leave; Plessy refused. He was arrested, and a New Orleans court convicted him of breaking the law. Plessy’s lawyer responded by filing a lawsuit against the presiding judge, John H. Ferguson, claiming that the law (and Ferguson’s decision) breached Plessy’s rights under the Equal Protection Clause of the 14th Amendment.

The North was complicit in the growing segregation and blocking of African-American voting rights taking place in the South. In 1892, Congress failed to pass a bill that would have protected voting rights. During the same period, Congress also nullified some of the Reconstruction-era laws. It was in this atmosphere that the Supreme Court issued its decision in Plessy v. Ferguson on May 18, 1896. The court declared that the 14th Amendment only protected rights like voting and serving on juries and did not apply to other situations. The court also denied that the facilities offered to African-Americans under “separate but equal” laws were inferior to those provided for whites.

The only justice to dissent from the majority opinion was Justice John Marshall Harlan. Harlan had owned slaves in Kentucky while working at his father’s legal firm and opposed the emancipation of former slaves. However, the rise of groups like the Ku Klux Klan changed his outlook. He argued in his dissent that “the arbitrary separation of citizens based on race while they are on a public highway is a badge of servitude wholly inconsistent with the civil freedom and the equality before the law established by the Constitution.”

The Significance of Plessy v. Ferguson

The verdict made “separate but equal” the doctrine of the land and allowed Jim Crow laws to flourish. Soon, not only were railroads segregated, but so were hotels, swimming pools, hotels, buses, and theaters. The 1899 case of Cummings v. Board of Education established that the “separate but equal” doctrine applied to schools, too. These rulings would stand until 1954, when Brown v. Board of Education was heard. Chief Justice Earl Warren, writing in 1954, essentially agreed with Harlan’s 1896 dissent. He wrote that segregated schools were inherently unequal and the plaintiffs were being denied equal protection of the laws guaranteed by the 14th Amendment.